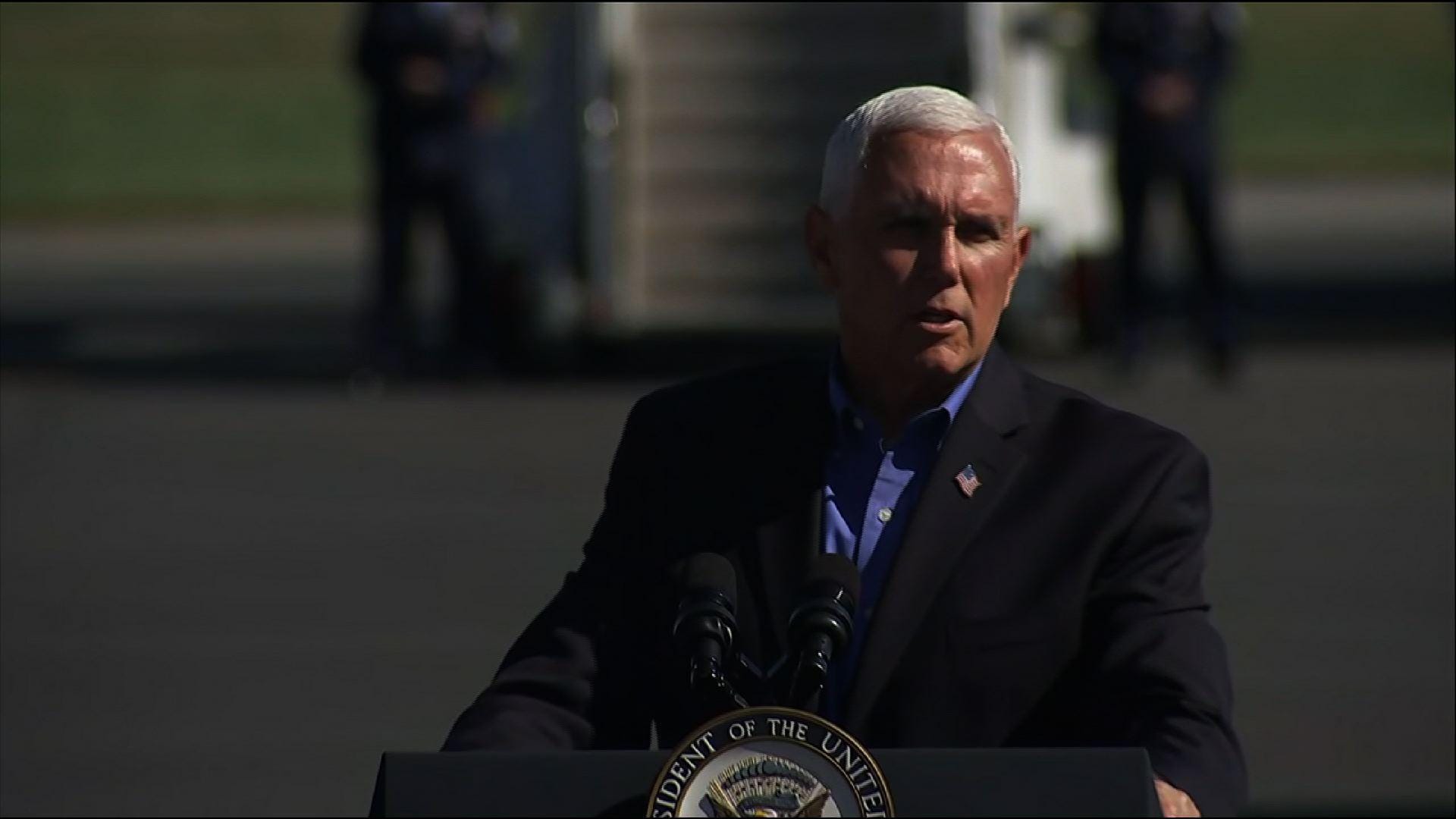 With barely two weeks left before Election Day, the battleground state of Pennsylvania is being flooded with visits by the presidential candidates and their campaign surrogates. Vice President Mike Pence headlines a rally in Reading on Saturday. (Oct. 17)

House Speaker Nancy Pelosi said Sunday the White House has 48 hours to reach a deal on COVID-19 relief before the Nov. 3 election.

“I’m optimistic,” Pelosi told ABC News “This Week” host George Stephanopoulos. “Because again, we’ve been back and forth on all of this.”

When pressed on whether Americans would see a COVID relief package passed before the Nov. 3 election, Pelosi said “that depends on the administration.

“With all due respect to some of the people in the president’s administration, they are not legislators,” Pelosi said. The speaker then said that “we now have agreement in the language,” though talks remained ongoing.

“When you say ‘may’ you give the president a slush fund. When you say ‘shall,’ you are going with what the science tells us must happen,” Pelosi said to explain the legislative semantics.

Pelosi also admonished President Donald Trump’s leading a crowd to chant “Lock her up!” about Gov. Gretchen Whitmer during a rally in Muskegon, Michigan on Saturday evening as “irresponsible.” The president’s calls come a little over a week after federal agents said they thwarted a plot to kidnap the governor.

“The president has to realize that the words of the president of the United States weigh a ton. And in our political dialogue, to inject fear tactics into it, especially a woman governor and her family, is so irresponsible,” the speaker said.

“The biggest antidote to his poison is the vote,” Pelosi said.

🗳️ Voting: See USA TODAY’s Voter Guide for information on registering to vote, when your state begins voting and what the candidates think about the issues.

We will update this article throughout the day. You can follow all of USA TODAY’s politics reporters on Twitter or subscribe to our daily On Politics newsletter.

As Las Vegas churchgoers prayed for good political fortune, President Donald Trump was not shy when the collection bucket came around.

Trump placed what witnesses called a handful of $20 bills into the bucket during a friendly service at the International Church of Las Vegas.

“The Lord said, ‘he is ready for the next four years and he will have a second wind,’” preached church leader Denise Goulet.

At one point, she asked Trump, seated in the front row, “do you love your job?”

The service also featured music performances with a band on stage and members twirling U.S. flags.

The event began a busy for Trump. After church, he headed to Newport Beach, Calif., for fundraisers. Later Sunday, it’s back to Nevada for an airport rally in Carson City.

Biden pushes Democrats in NC to get out and vote

“Don’t just vote for me and Senator Harris,” Biden told a socially distant crowd. “You’ve got a governor’s race, a senate race, a record number of black women on the ballot.”

Biden emphasized his policy plans for health care and jobs, linking them with his criticisms of the Trump administration’s response to the COVID-19 pandemic.

“Folks are worried about making their next mortgage payment, whether their healthcare will be ripped away during a pandemic, worried about sending their kids to school … well, that’s Donald Trump’s presidency,” Biden declared.

Biden also addressed the protests and civil unrest still apparent in the country, asserting that “We have no need for militias to be patrolling our streets.” The former vice president also referenced some of Durham’s history while speaking about the need for greater economic opportunity.

“It was right here in Durham, on Parrish Street, that an oasis of Black-owned businesses thrived, even during Jim Crow,” Biden said. “Place that offered the country a glimpse of what we could become if we chose to live up to our founding values.”

The COVID-19 pandemic has upended the race in North Carolina, causing a record number of absentee ballots to be requested in the state. Republican incumbent Sen. Thom Tillis contracted COVID-19 in early October, just as it was revealed his Democratic rival, Cal Cunningham, was had exchanged apparently romantic texts with a woman who was not his wife.

“It’s incredibly disturbing that the president of the United States, 10 days after a plot to kidnap, put me on trial, and execute me …  is at it again and inspiring and incentivizing and inciting this kind of domestic terrorism,” Whitmer said.

During a Trump campaign appearance in Michigan Saturday, the crowd chanted “lock her up” when Trump criticized the Democratic governor.

On Sunday Trump campaign adviser told CNN her father-in-law didn’t do anything “to provoke people to threaten this woman at all.”

“He was having fun at a Trump rally,” she said on “State of the Union.”

WASHINGTON – More and more people are attending President Donald Trump’s airport rallies, many of the supporters packed together without masks despite a resurgence of COVID-19.

Don’t expect that to change during the last two weeks of the campaign.

“People don’t want to be living in fear,” Trump campaign senior adviser Jason Miller said when asked about the rallies during an appearance on Fox News Sunday.

Trump survived a bout with COVID-19 earlier this month. There is evidence some of his supporters contracted the coronavirus after attending his campaign events.

The Minnesota Department of Public Health reported it has traced 16 COVID cases to a Sept. 18 Trump rally in Bemidji (plus four more to an anti-Trump rally just outside that event). Three more cases have been traced to a Trump event in Duluth on Sept. 30, less than two days before Trump tested positive for the virus.

In the Fox interview, Miller said “we do pass out masks at the rallies.” He also said the campaign conducts temperature checks on attendees and give out hand sanitizer – and will continue to do so right up to the election.

House Speaker Nancy Pelosi admonished President Donald Trump’s leading a crowd to chant “Lock her up!” about Gov. Gretchen Whitmer during a rally in Muskegon, Michigan on Saturday evening as “irresponsible.” The president’s calls come a little over a week after federal agents said they thwarted a plot to kidnap the governor.

“The president has to realize that the words of the president of the United States weigh a ton. And in our political dialogue, to inject fear tactics into it, especially a woman governor and her family, is so irresponsible,” the speaker said Sunday on ABC News’ “This Week.”

“The biggest antidote to his poison is the vote,” Pelosi emphasized.

“This is exactly the rhetoric that has put me, my family, and other government officials’ lives in danger while we try to save the lives of our fellow Americans,” the governor tweeted after Trump’s rally.

With only sixteen days before the Nov. 3 presidential election, there is no shortage of drama in the final stretch as President Donald Trump and former Vice President Joe Biden make their final pitches to voters as campaigns up and down the ballot pour resources into key races.

Both candidates will continue to stump around the country today. Trump, once again on the campaign trail after being hospitalized for COVID-19, will attend a church service in Las Vegas at 9:00 a.m. PDT, then a campaign fundraiser in Santa Ana, California at mid-day. He will finish his Sunday at a campaign rally in Carson City, Nevada at 7:00 p.m. PDT.

Biden will travel to North Carolina Sunday, where he will attend an event in Durham encouraging North Carolinians to plan to vote by mail and in-person during the state’s early voting period, which began Thursday and ends Oct. 31.

WASHINGTON – The next (and final debate) isn’t until Thursday, but President Donald Trump is already trying to pressure and intimidate the moderator, NBC News White House Correspondent Kristen Welker.

“She’s always been terrible & unfair, just like most of the Fake News reporters, but I’ll still play the game,” Trump tweeted Saturday. “The people know!”

Welker hasn’t commented, but plenty of colleagues and competitors testified to her fairness and professionalism. They said she will do great when moderating Thursday’s showdown between Trump and Democrat Joe Biden in Nashville, Tenn.

“Kristen is one of the toughest, fairest reporters you’ll ever meet,” tweeted Kathryn Watson, a White House reporter for CBS News.

Trump, who criticized moderator Chris Wallace of Fox News ahead of the Sept. 29 debate with Biden, also went after Welker during a Saturday night rally in Janesville, Wisconsin.

Yet many people have praised Welker’s reporting during the Trump administration – including Trump himself.

Calling on Welker during a news conference in Switzerland in January, Trump complimented her for landing a weekend anchor gig on NBC’s Today show.

“They made a very wise decision,” Trump told Welker.

GOP senators try to save majority by distancing themselves from Trump

Senate Majority Leaders Mitch McConnell and other Senate Republicans have taken deliberate steps to distance themselves from Trump as recent polls and independent analyses show Democrats with a better than 50-50 chance of flipping the necessary number of seats (three if Biden wins, four if Trump does) to retake the upper chamber.

It’s a balancing act for Republican Senate candidates running for re-election in battleground states who need the GOP base to win as well as a significant share of independents who may be turned off by Trump’s rhetoric, behavior and policies.

“These senators are pulled in two different directions,” said Jessica Taylor of the nonpartisan Cook Political Report. “They can’t irritate the very conservative Trump base but they also need independents to win the general election. It’s a no-win situation for them in many regards.” 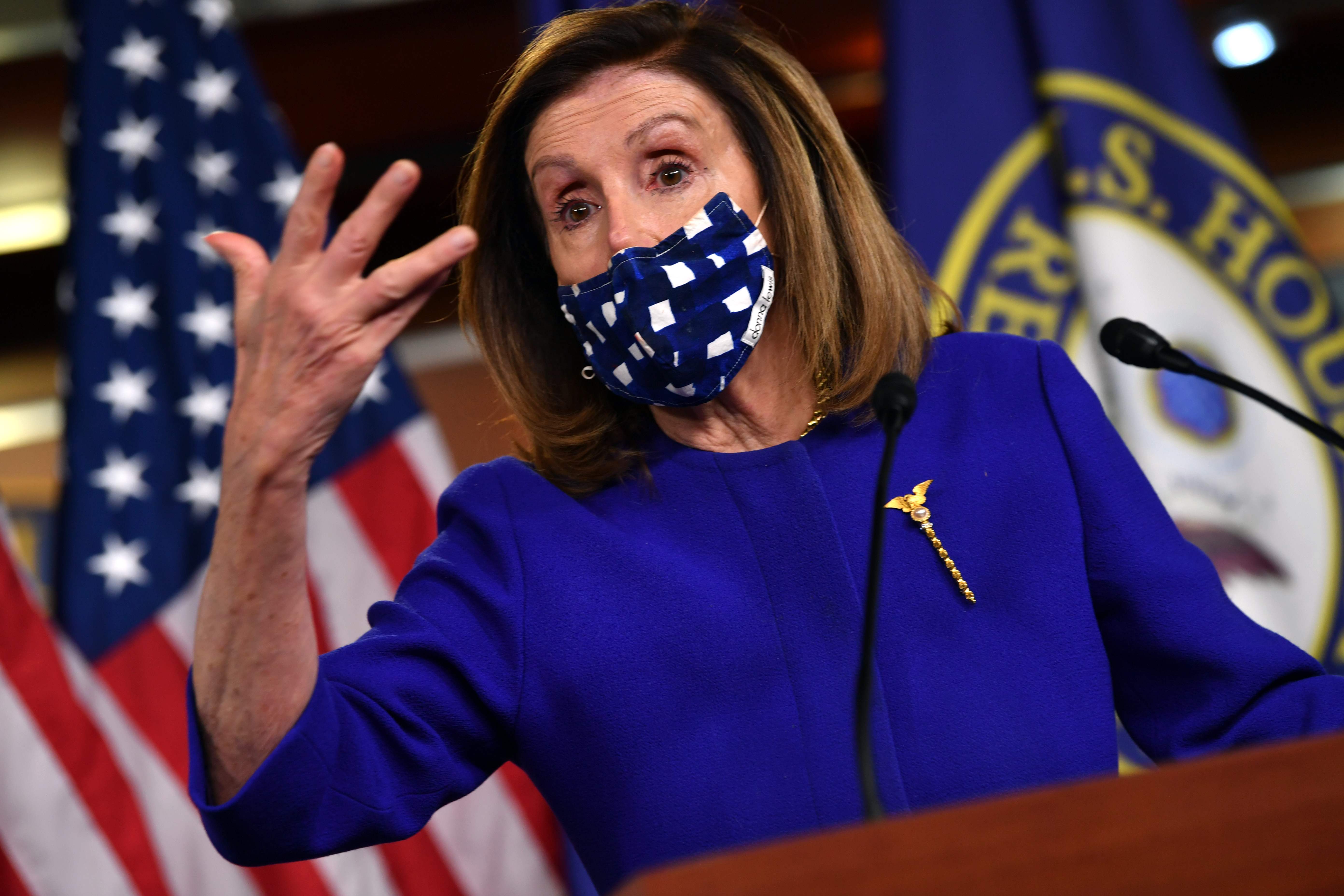