ROCKFORD, Ill. — A suspect was in custody Sunday following a shooting rampage at a bowling alley that left three people dead and three others wounded.

Police Chief Dan O’Shea said the suspect, a 37-year-old male, was thought to be the only shooter at Don Carter Lanes. However, O’She said the investigation into Saturday’s attack was ongoing and described it as “very, very fluid.”

O’Shea said shots were fired inside and outside of the bowling alley in this city of 150,000 people, 90 miles west of Chicago.

“We have the scene secure and a person of interest in custody,” O’Shea said. “When officers arrived on scene, the shooter was still in the building. No officers fired their weapons that we know of at this point but the individual that we believe is responsible and the only individual we believe at this point to be involved, we have in custody.”

He did not have information about any of the shooting victims available. “I do know there are two teenagers that have been shot but I don’t know the ages,” O’Shea said.

Police have cleared the area and are asking the public to stay away.

Mayor Tom McNamara released a statement saying he was “angered and saddened” about the shooting.

The shooting comes near the end of what’s been the deadliest year on record in Rockford, Illinois. There have now been 35 homicides in the city this year, the most of any year on records dating back to 1965. The next highest had been 31 recorded in 1996.

The city also endured 21% more violent crimes and 49% more shots fired through November this year, according to the latest police data released Thursday. 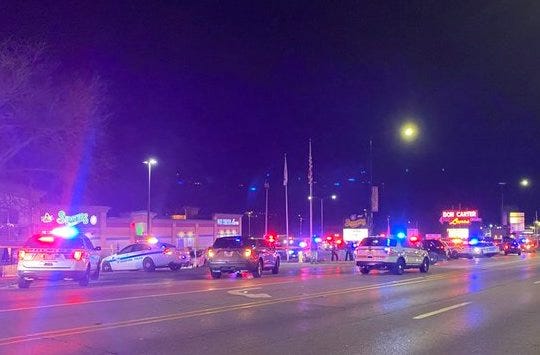