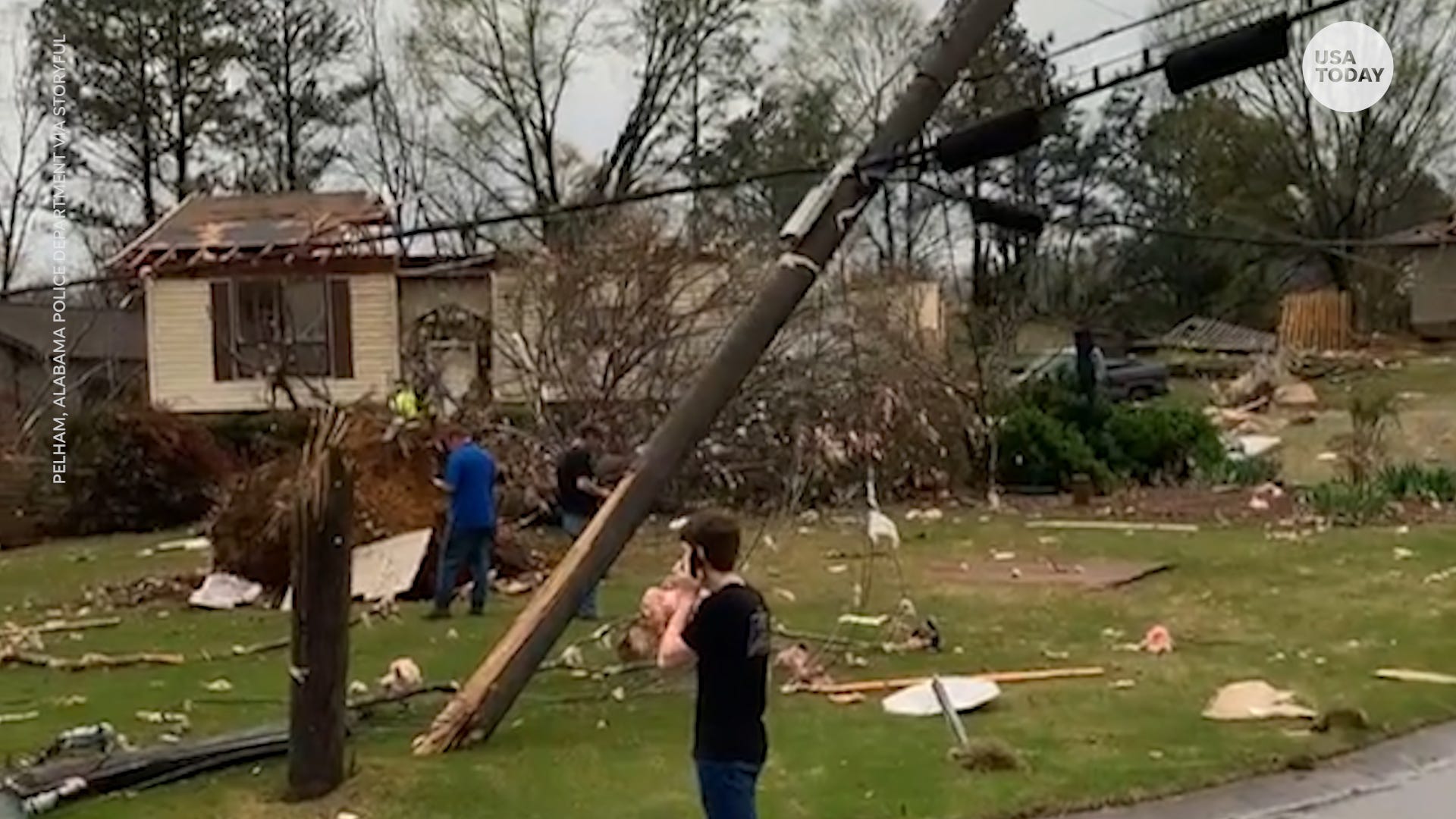 About 50 million people were in the path of severe weather across the Southeast, and at least five people are dead.

GADSDEN, Ala. — After multiple tornadoes touched down in the South on Thursday – killing five people in Alabama, knocking out power, destroying homes and downing trees across the region – more severe thunderstorms could be coming this weekend.

There is a “marginal risk of severe thunderstorms” Friday in Georgia and the Carolinas as well as in parts of Mississippi, Tennessee, Arkansas, the Great Plains and the Northeast, the National Weather Service said.

But on Saturday, large hail, damaging wind and tornadoes are all possible in the Lower Mississippi Valley as “strong to severe storms” return to the region, forecasters said.

The South was already rocked with severe weather this week. Five people were killed Thursday in three different locations in Calhoun County, Alabama. Meanwhile, at least one person died in Mississippi on Wednesday when a tree fell into a mobile home in Wilkinson County.

More than 35,000 people in Alabama and Georgia remained without power Friday morning, according to the utility tracker, PowerOutage.us. Power was also knocked out to over 150,000 customers in Ohio and Pennsylvania due to strong winds Friday.

Alabama tornado kills 5; as many as 8 twisters may have touched down

John De Block, a meteorologist with the National Weather Service in Birmingham, said as many as eight tornadoes may have hit Alabama on Thursday. At least one tornado traveled about 100 miles.

Calhoun County Coroner Pat Brown confirmed five people, all believed to be adults, died in three residential structures Thursday. Brown said three family members were killed inside a wood frame home in Ohatchee, a small east Alabama town, after an apparent tornado touched down around 3 p.m. Another man was killed in a mobile home in Ohatchee. The fifth victim, a woman, died in a mobile home in Wellington, Alabama.

Severe storms began popping up in central Alabama mid-afternoon and continued to come in waves through the early evening.

Hundreds of structures across the state were damaged by the multi-storm system. More than 100 miles southwest of Ohatchee, an apparent tornado that spun up in Mississippi tracked its way over the state line and into Bibb County.

The apparent tornado caused significant damage near Centreville, where Richard Hill surveyed the remains of his son’s mobile home Thursday evening. A large tree fell across the home, Hill said, and other mobile homes nearby were destroyed.

Hill’s son initially tried to wait the severe weather out, until a family member convinced him to seek shelter elsewhere shortly before the apparent tornado hit.

“They lost everything,” Hill said.

Derrick Colburn weathered the storm inside his Bibb County home, which was damaged.

“I hope everyone else around here is OK,” Colburn said.

Centreville Mayor Mike Oakley told ABC 33/40 news that a local airport was hit. “We have airplanes torn apart like toys. We’ve got homes along here that are totally destroyed, trees down, power lines down. It’s pretty devastating.”

Firefighters outside a flattened home in the Eagle Point subdivision said the family that lived there made it out alive. Nearby homes were roofless or missing their second stories.

Alabama Gov. Kay Ivey issued an emergency declaration for 46 counties as the severe weather approached, and officials opened shelters in and around Birmingham. She also issued a statement via Twitter late Thursday following reports of residents killed in the storms.

“Significant and dangerous weather continues to impact portions of Alabama, and I urge all folks in the path of these tornadoes and storm systems to remain on high alert,” Ivey said in a prepared statement. “Tragically, we are receiving reports of loss of life. I offer my sincerest prayers to all impacted. Unfortunately, the day is not over yet. Y’all, please stay safe and vigilant!”

‘Get off the roads’ in Newnan, Georgia; 1 dead in Mississippi

In Newnan, there were reports of downed trees and power lines, sparking police to ask residents to “get off the roads” in a Facebook post, as emergency officials surveyed the area.

It will “take several days, with the help from outside crews, to put the system together again,” said Newnan Utilities general manager Dennis McEntire.

Meanwhile, in Mississippi, high winds that swept through the state left at least one person dead and caused widespread damage, officials said Thursday.

Ester Jarrell, 62, was killed after a tree knocked over by high winds in Centreville fell on her mobile home Wednesday evening, according to Wilkinson County Emergency Management.

In Middle Tennessee, possible tornadoes touched down in Smyrna and Wayne County. Throughout the region, wind speeds reached up to 65 mph and golf ball sized hail fell. Sam Herron, a meteorologist with the weather service in Nashville, said Waynesboro, Smryna, and Portland were particularly hard hit. 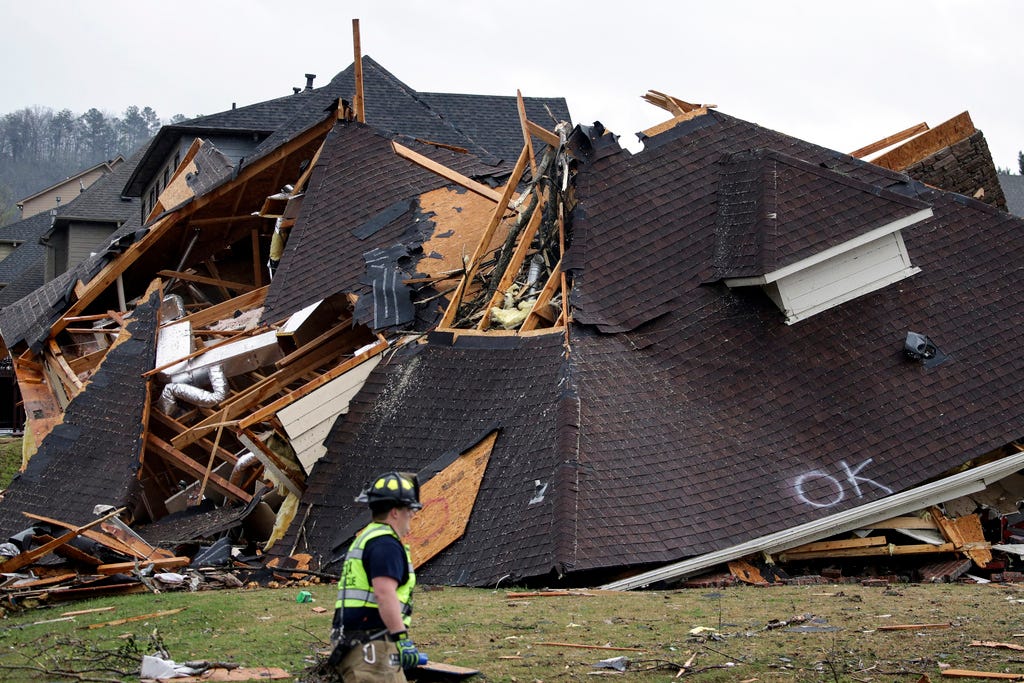