US election: Joe Biden paints himself as a unifying force ahead of final TV debate with Trump
I’ve three children in public universities, Ngige speaks on ASUU strile
BREAKING: We’re not thinking of strike yet – Labour
Abandoned baby found by the roadside in Akure
JUST IN: FIFA bans CAF boss Ahmad Ahmad for 5 years
N784m debt: Court rules in AMCON’s suit against Ogboru
David Umahi’s Defection And Risk Of Impeachment By Festus Ogun 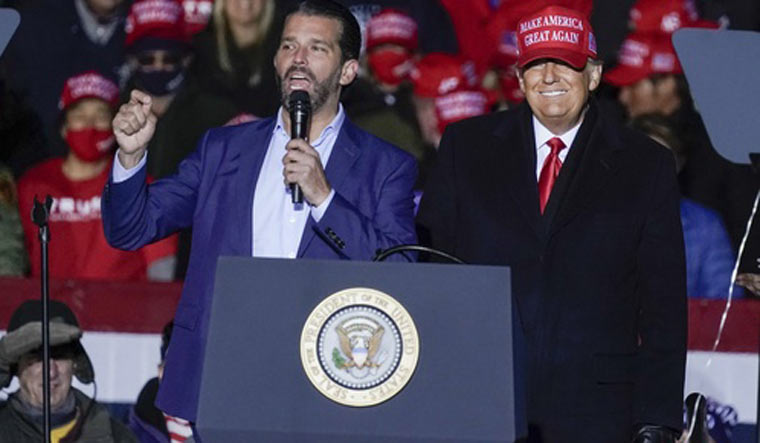 Donald Trump Jr., the eldest son of President Donald Trump, has tested positive for the coronavirus, his spokesperson confirmed on Friday night, November 20.

“Don tested positive at the start of the week and has been quarantining out at his cabin since the result. He’s been completely asymptomatic so far and is following all medically recommended COVID-19 guidelines,” Trump Jr.’s spokesperson said.

Trump Jr. has been isolating and has no symptoms, the spokesperson told the AP.

He is another person associated with the President who has tested positive for COVID-19.

Earlier on Friday, Rudy Giuliani’s son Andrew Giuliani, who is a White House aide, announced on Twitter he had tested positive.

Trump Jr.’s girlfriend, Kimberly Guilfoyle, also tested positive for COVID-19 over the summer while the couple campaigned for the President, CNN reported.

Two Republican senators, Rick Scott of Florida and Chuck Grassley of Iowa, have announced in the last few days that they tested positive, the network reported.

Twenty-six House members and 10 senators have so far tested positive or have been presumed positive since the beginning of the pandemic, according to CNN.