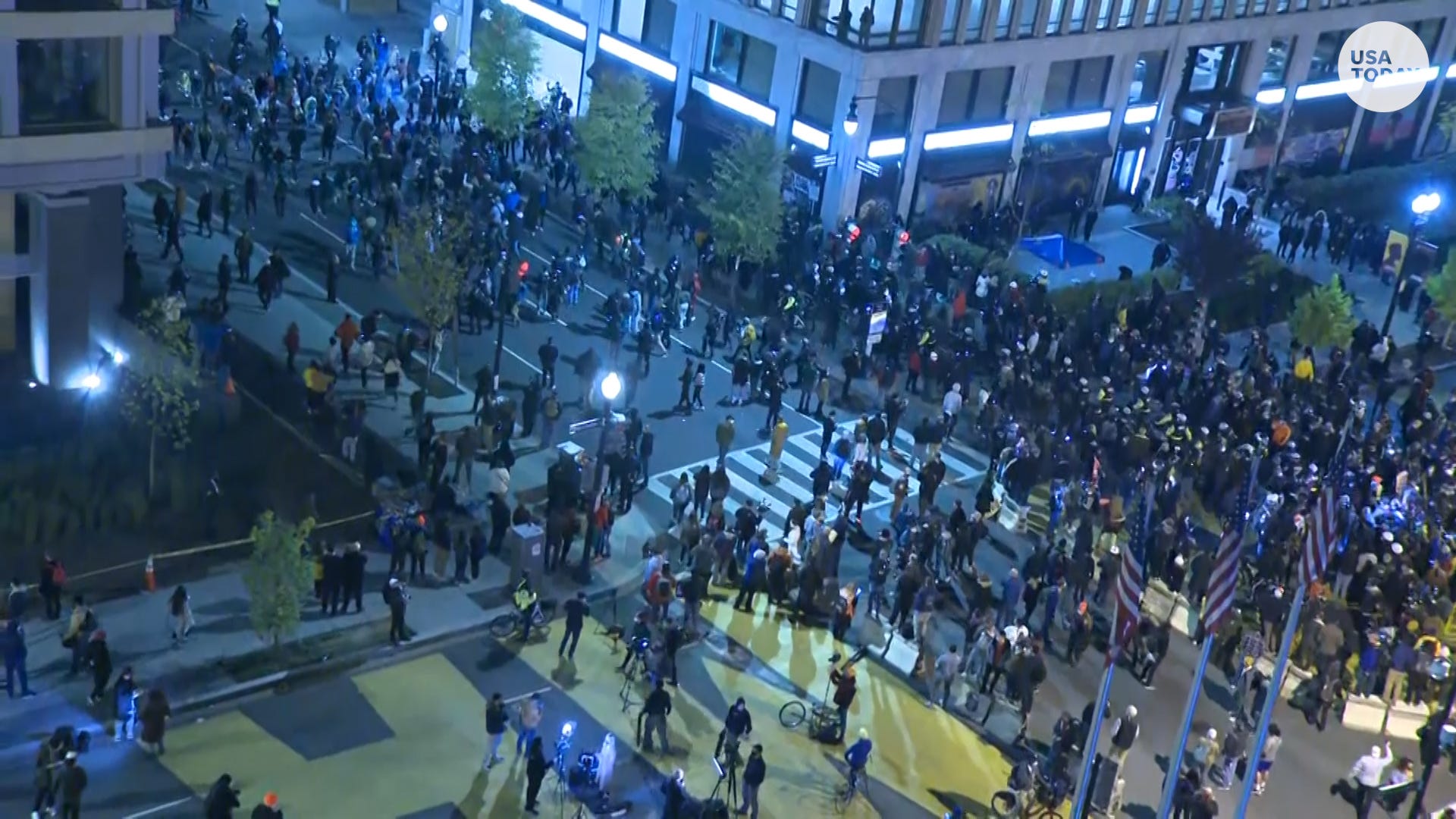 Election 2020: Fear of widespread protests not realized on night

Protesters took to the streets in cities across the U.S. Wednesday for a second night as the 2020 presidential election inched closer to declaring a winner.

Tensions ran high into the night following a mostly peaceful start to the day, with reports of “widespread violence” leading to the National Guard being deployed in Portland, Oregon. Arrests were also made in Minneapolis and New York City, with the NYPD confiscating weapons.

More than 100 events are planned nationwide between Wednesday and Saturday, organized by local partners of Protect the Results, a coalition of more than 165 grassroots organizations, advocacy groups and labor unions. The group, led by activist groups Indivisible and Stand Up America, has decided not to hold hundreds more events that were initially planned.

In Washington, D.C., organizers at ShutDownDC plan for more aggressive actions as the week goes on depending on the outcome – whether President Donald Trump wins or whether he tries to question the results.

“We knew this would happen,” the advocacy group said in a tweet calling for a rally Wednesday with the hashtags #DeliverDemocracy and #CountEveryVote.

A group of supporters of President Donald Trump gathered at the Arizona Capitol and Maricopa County elections center in Phoenix to demand election workers keep counting ballots. The county elections department indicated it would not be intimidated.

It tweeted at 10:33 p.m. MST that its staff “will continue our job, which is to administer elections in the second-largest voting jurisdiction in the county.”

It also thanked the county sheriff’s department, which is “doing (its) job, so we can do ours.”

The tweet came soon after protesters started leaving the center in the city’s downtown. The group sang “YMCA,” the Village People anthem that frequently was played at the end of Trump’s election rallies.

At one point, the supporters surrounded a pedicab driver who was playing a song critical of Trump. the popular YG song “FDT,” which says “(Expletive) Donald Trump,” loudly from his pedicab. But deputies separated him and he left.

4 arrested in Denver as protesters clash with police

Police arrested four demonstrators after receiving reports of vandalism, including broken windows and the painting of graffiti, in downtown Denver.

The four were expected to be booked for suspicion of criminal mischief and other charges after being taken into custody, said Doug Schepman, spokesman for the Denver Police Department. They clashed with police along a stretch of East Colfax Avenue, a business corridor in the downtown.

Deborah Takahara, an anchor and reporter for KWGN and KDVR in Denver, reported that officers seized a pistol, knife, hammer and bear spray.

In a 10 p.m. PST update, Fox said one of those arrested was armed with a gun, knife and was toting an improvised explosive device. Officers had been attacked with bottles thrown at them at least one Molotov cocktail.

Unified Command in the area, which consists of the Oregon State Police, the Portland Police Bureau and the Multnomah County Sheriff’s Office, advised Brown to activate the Guard, Fox said.

“We don’t take this decision lightly,” Unified Command said in a statement. “Under the governor’s order, we continue to work together and share our resources and information to address any public safety concerns.”

Law enforcement officers are monitoring two groups in the area, which both began as marches, Fox said.

The New York Police Department said more than 20 people “who attempted to hijack a peaceful protest by lighting fires, throwing garbage and eggs in Manhattan” were arrested Wednesday.

“Bringing weapons to peaceful protests cannot and will not be tolerated,” the NYPD tweeted. “We are currently working to de-escalate the situation. Anyone caught with a weapon will be arrested.”

They chanted “Stop the Steal,” and one man wearing an American flag mask told cameras, “It’s time for the purge.”

There has been no evidence to show the election has been stolen or fraudulent despite baseless attacks on Nevada’s voting system by the president and his campaign.

On Wednesday, multiple Twitter profiles began promoting a #StopTheSteal protest in front of the Clark County Elections Department. The group gathered around 7:30 p.m. but then began dispersing about a half hour later.

Arrests in Minneapolis after protesters march to interstate

Minnesota State Patrol and the Minneapolis Police Department arrested protesters Wednesday after they marched to Interstate 94 and blocked traffic, police announced on Twitter.

A crowd of about 200 people marched to the interstate, the Minnesota State Patrol reported. The Minneapolis Police Department added areas of I-94 were shut down, and updated Twitter followers on the crowd’s location.

The Star-Tribune of Minneapolis reported the march was organized by Twin Cities for Justice 4 Jamar in coordination with the National Alliance Against Racist and Political Regression. The outlet added that group eventually merged with a second protest.

As night fell in Chicago, hundreds of people gathered at a downtown plaza for a “Trump out! Power to the people!” protest, co-organized by more than a dozen organizations and billed as a “post-election protest” to demand the defunding of the police, immigrant rights and more.

“We must count every vote because too many of our people have already had their rights stolen from them,” said Amisha Patel, executive director of the Grassroots Collaborative, a Chicago-based labor coalition.

Pennsylvania has become a focal point of the presidential election, and protesters took to the streets Wednesday afternoon to demand every vote be counted.

The Washington Post reported demonstrators gathered near Independence Hall in downtown Philadelphia, with two holding a banner that said “Count every vote.”

A chaotic scene erupted outside the vote tally room at TCF Center in Detroit as election officials informed dozens of challengers that they could not reenter the room due to it being over-capacity.

People gathered outside the ballot counting area pounded on the doors and windows, shouting, “Let us in” and “Stop the count” as only about a half-dozen tables continued to count ballots.

Police had to push back crowds as they argued to be allowed in the vote-counting arena. Republicans shouted that they were unfairly being kept out, but then Democratic challengers countered that it was not true because they were being kept outside, too.

About 30 demonstrators gathered in front of Baltimore’s City Hall on Wednesday afternoon to protest Trump’s false declaration of victory, the Baltimore Sun reported. The crowd, led by the Sunrise Movement, sang songs and listened to speeches about the country’s political state.

Organizer Kate Ericksen told the Sun that the group knew the results would still be “up in the air” when they planned the rally but wanted a place for people in the movement to gather.

In downtown Detroit, Reuters reported about 100 people gathered for an interfaith event and a planned march Wednesday morning to demand officials count all votes and stop Trump from “stealing the election.”

Protesters chanting “stop the vote” also gathered outside a convention center in Detroit, according to social media footage shared by reporters. 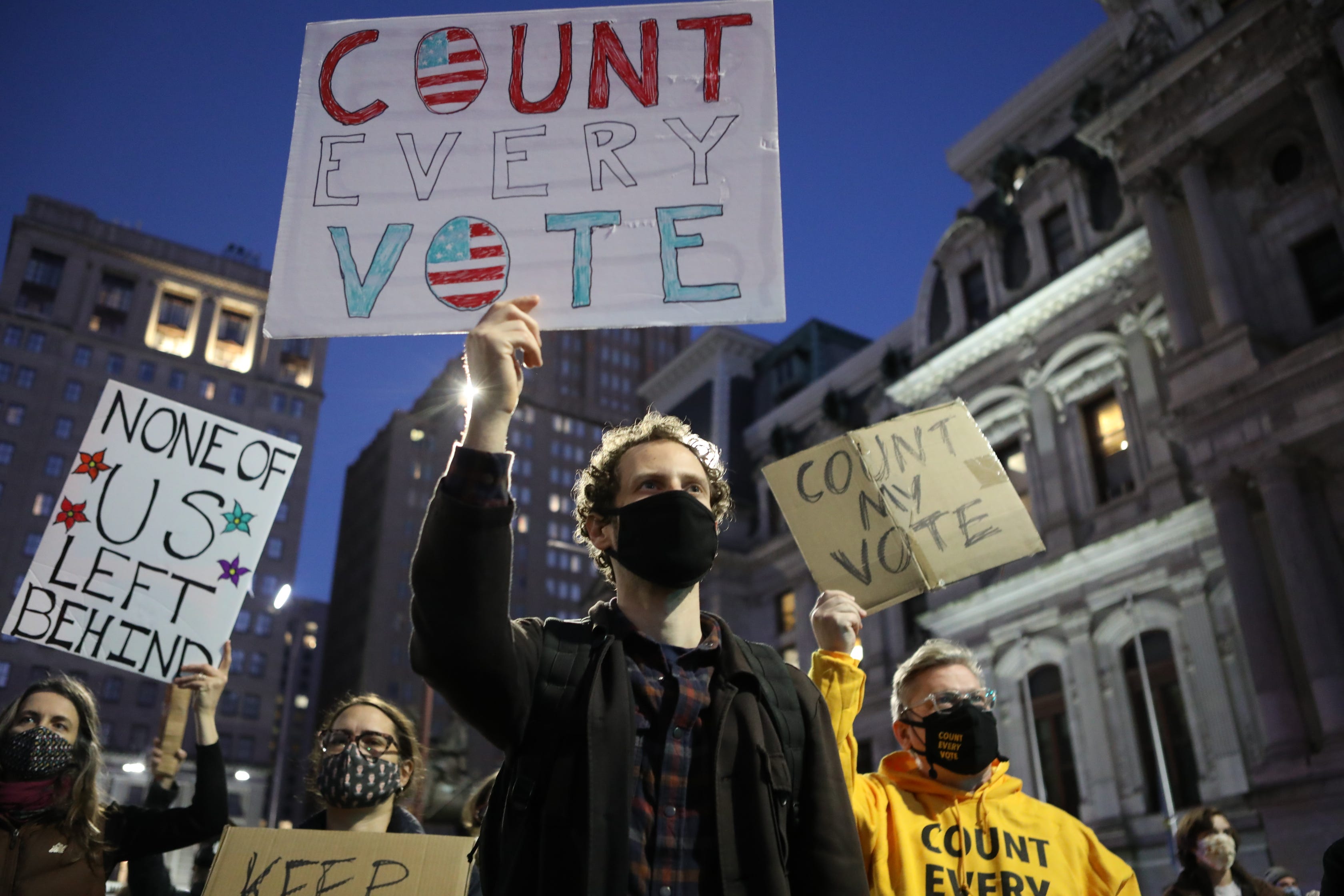 2020-11-05
Previous Post: From Berlin to Beijing, America’s election drama as seen by the rest of the world
Next Post: Election results updates: Biden is poised to win but it isn’t over yet. What we know