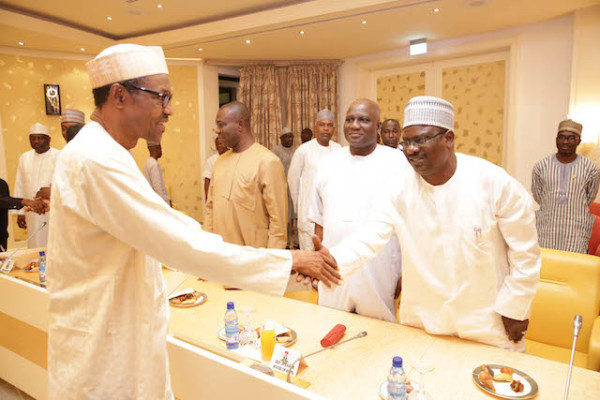 The Spokesperson for the Senate, Dr. Ajibola Basiru, and the Chairman, Senate Committee on Army, Senator Ali Ndume, have asked the President Muhammadu Buhari to comply with the National Assembly’s resolutions on the ongoing nationwide protests against police brutality and bad governance.

Part of the resolutions of the federal lawmakers included an appeal to Buhari to address the nation immediately on the issue.

Basiru and Ndume lamented the current situation in the country, especially the killing of innocent protesters by soldiers.

According to Ndume “I have monitored with shock and personal indignation, the turnout of events on the #EndSARS protest with evidence of obvious descent of the country, particularly in the South-West of Nigeria, after the reckless and disturbing incident at Lekki Tollgate on Tuesday evening.

“As a student, who was involved in several protests, I see no reason for the display of outright recklessness by shooting into unarmed protesters by whoever; governmental or otherwise.

“As an elected representative of the people of Osun Central in the Senate, I deprecate the clear lackadaisical attitude of the Federal Executive to the lingering anarchy and destruction of lives and property.

“At the sitting of the Senate on Tuesday, October 20, 2020, it was resolved that the President should address the nation, not knowing that the evening of that day will bring about more sinister dimensions to the already deteriorated situation.”

Ndume also insisted that Buhari must address the nation immediately in order to reduce the tension.

He said, “Mr President should talk to Nigerians. The Senate has passed a resolution, even though it is advisory, I think it is worth giving the necessary consideration. The parents of the protesting youths should also calm down their children.

“Those who are protesting now should know that government has accepted their demands. They should be organised under a leadership, which will now follow up on the five-point demand, which the government is already considering.

“Any unconnected process without leadership would always end up in chaos,” he added.

2020-10-22
Previous Post: He posed as a doctor and a wilderness expert. Behind the facade was an accused child molester.
Next Post: BREAKING: Lagos May Ease Curfew On Friday – Sanwo-Olu