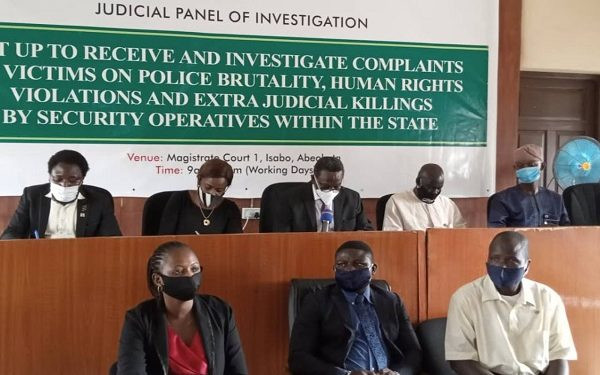 A resident of Ogun and victim of a stray bullet from an unknown police officer in Abeokuta, Kamol Ganiyu, has said he doesn’t want any form of monetary compensation from the government as his only dream is for him to be able to walk again.

Ganiyu made this plea when he appeared before the Ogun Judicial Panel of Investigation set up to investigate complaints of victims on police brutality, human rights violations, and extrajudicial killings by security operatives within the state, today November 9.

Ganiyu while recounting his ordeal with the SARS official, said on July 17, 2017, he was driving under Ibara bridge in Abeokuta and was heading to his home when a gunshot fired by a police officer, pierced through his car and landed on his right leg.

”I was driving and right under Ibara bridge in Abeokuta, I heard a gunshot which penetrated my car and destroyed my right leg.

I fainted after losing so much blood and was rushed to the Federal Medical Centre, Idi Aba, Abeokuta where I spent over six months receiving treatment” he said

Ganiyu added that after the incident, “the police officers handling the case called me to Elewe-Eran Police station, offered me N250,000 and asked me to sign a form that I would not pursue the case in court which I refused to take and sign.”

He told the committee members that his desire is to walk again so he can lead his normal life again.

“I need government’s support because in the x-ray I took, it was revealed that my joint has been damaged by the gunshot and a huge amount is needed to fly me out for adequate treatment” he said

ASP Akeem Jimoh and Inspector Lola Onifade who Ganiyu accused of offering him compensation to bury the case denied the accusation. They however did not reveal the name of the policeman who fired the stray bullet that injured Ganiyu.

The chairman of the panel, Justice Solomon Olugbemi, said 207 medical bill receipts, 8 photographs, and cloth with bloodstain were received while the car with a bullet hole was also inspected and marked as evidence presented by the petitioner.

The post ”I want my leg restored, not compensation”- SARS victim tells Ogun judicial panel appeared first on Within Nigeria.