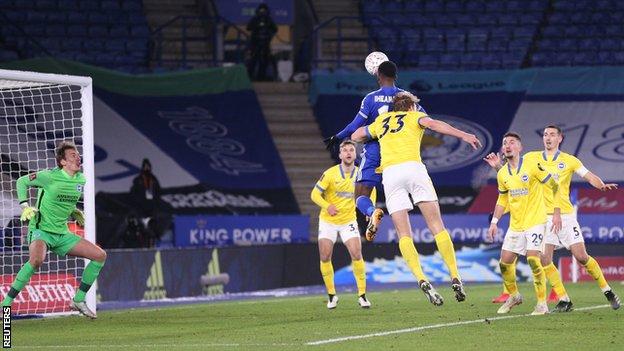 A late goal from Kelechi Iheanacho sealed a hard fought 1-0 against Brighton and Hove Albion and sent Leicester into the quarter-finals of the FA Cup.

It was Iheanacho’s second goal in his last three games for Leicester after netting in the 2-0 away win against Fulham.

Iheanacho, who replaced the returning Jamie Vardy in the 62nd minute, scored in the 94th minute to send Brendan Rodgers’ side into the last eight.

Also in action for Leicester was Wilfred Ndidi who returned from injury and was in the starting eleven before going off for Hamza Choudhury.

Meanwhile, Iheanacho was voted Leicester City’s Man of the Match, after he netted the winner in the FA Cup win.

Leicester announced Iheanacho as the winner on their verified Twitter handle after conclusion of votes by the club fans.