‘It’s fever-pitched’: Miami Beach to extend state of emergency after more than 1,000 arrested amid spring break 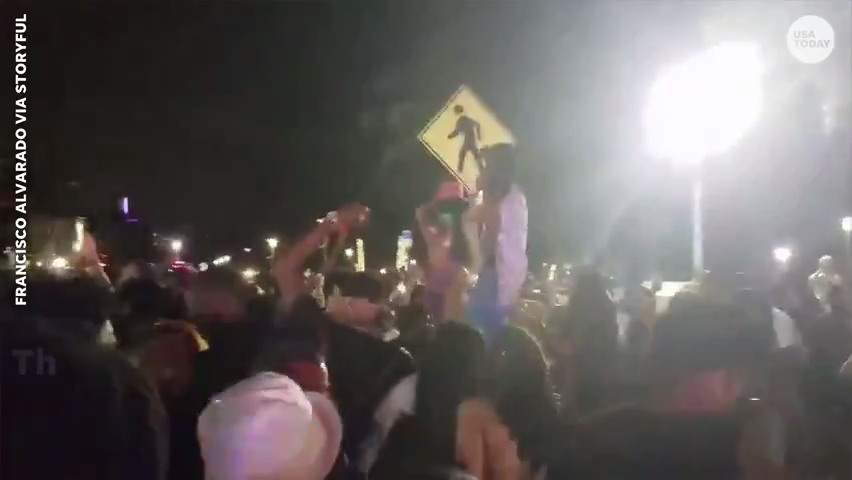 Miami Beach has declared a state of emergency in its entertainment district due to an influx of spring breakers who have inundated the city.

Miami Beach plans to extend a state of emergency for the entertainment district to control spring break crowds.

The extension, expected to be announced Tuesday, will authorize a curfew Thursday night through early Monday that will be eligible for extension every week  through April 13, Melissa Berthier, spokesperson for the city of Miami Beach, told USA TODAY. The state of emergency was declared Saturday.

“The City Commission has authorized the interim city manager to extend the declaration of a state of emergency in one-week increments through April 13, 2021,” the city said in a release Sunday, which included updates to the curfew rules.

Miami Beach Police said more than 1,000 people have been arrested this spring break season, and about 80 guns have been seized. Police Chief Richard Clements said the trouble intensified last Monday when an unusually large crowd blocked Ocean Drive “and basically had an impromptu street party.” By Thursday, fights were breaking out, setting off dangerous stampedes to safety.

What’s the situation around the US? Popular spring break beach towns have few COVID-19 restrictions

‘We got bored and wanted to go on a trip’: Tales from a pandemic spring break in Cancun, Mexico

There is simply too much disorder for the Miami Beach Police Department to handle, Mayor Dan Gelber told USA TODAY on Saturday.

“The problem is there’s a few things happening simultaneously. There’s a confluence of challenging circumstances,” Gelber said. “We’ve got too many people and too many looking to act out while there’s a pandemic going on.

“I stay up at night and worry when I’m going to be getting a phone call about some event that’s happening. We see the videos, the photos of throngs of people, sometimes something happening that creates unrest.”

Interim City Manager Raul Aguila said many people from other states were coming in “to engage in lawlessness and an ‘anything goes’ party attitude.” He said most weren’t patronizing the businesses that badly need tourism dollars and instead were merely congregating by the thousands in the street.

The amended state of emergency is expected to be in effect on Thursday, Friday, Saturday and Sunday nights until April 13. It will limit traffic on three causeways leading to South Beach in an effort to keep all but residents, hotel guests and employees from driving onto the island. In addition, it imposes a curfew in the entertainment district of Miami Beach from 8 p.m. to 6 a.m. and closes sidewalk dining from 7 p.m. through 6 a.m.

Tourists might be “a little disappointed,” Gelber told USA TODAY on Monday, but that’s not his main concern.

“At the end of the day, I’ve got to follow a public health and safety directive,” he said. “If we could have well-behaved tourists in the evening, it’d be great, but we haven’t had that. I don’t want the behavior we’re seeing, obviously.”

Atmosphere different from past spring breaks

“It’s fever-pitched,” Angus Thomas, a British photographer who has been stuck in Miami Beach because of COVID-19 travel restrictions, told USA TODAY.

This isn’t Thomas’ first spring break in Miami. He was in the city two years ago about the same time but said the atmosphere this year is much different.

“People are coming off the plane on $65 return flights, and they are exploding into Miami,” he said. Some travel companies have offered pandemic deals to lure visitors. The U.S. Centers for Disease Control and Prevention is still advising Americans to avoid nonessential travel.

Thomas walked around the entertainment district Saturday evening before the 8 p.m. curfew kicked in. He noted that he saw many people carrying open containers of alcohol, but the people he photographed weren’t aware of the upcoming curfew. He found out about the curfew from a friend.

He watched from a penthouse apartment overlooking Ocean Drive on Saturday night as crowds were dispersed when the 8 p.m. curfew kicked in for the first time. “I didn’t see the violence; I did see the panic,” he said, noting he saw people scrambling, some of whom were trampled. By 10 p.m. the area was clear.

The crowd was defiant but mostly nonviolent on Saturday night, refusing to submit to the curfew that had been enacted only four hours earlier, when officers in bulletproof vests released pepper spray balls to break up the party, according to The Associated Press. A curfew-defying crowd showed up again Sunday night.

The situation ignited racial tensions. Some white residents referred to the crowd of predominantly Black tourists as “animals” and “thugs” on social media.

“We have to realize that we are definitely fighting an undertone of racism,” DeAnne Connolly Graham, a member of Miami Beach’s Black Affairs Advisory Committee, told the Miami Herald.

But Gelber rejected the claim that anyone has been targeted for their race, according to The Associated Press.

“When hundreds of people are running through the streets panicked, you realize that’s not something that a police force can control,” he said during the commission meeting Sunday.

Miami Beach residents rarely visit Miami Beach’s entertainment district, according to Louis Aguirre, an anchor and correspondent for WPLG LOCAL 10 News/ABC Affiliate for South Florida, who was born and raised in Miami.

“Hopefully this does not become new reality,” he said. “(It’s been like this for) two weeks now with the chaos building and crowds building on South Beach.”

Aguirre said what has been happening the past two weeks is “complete and utter total chaos,” but it goes beyond frustration. It’s dangerous, he said, citing shootings and stabbings.

Miami encouraged tourism amid pandemic, but Miami Beach did not

Miami’s tourism arm just spent $5 million on its biggest national advertising campaign in 20 years, seeking a rebound after billions of dollars were lost to the pandemic.  Last year’s spring break was canceled, and beaches were closed across the Sunshine State.

Miami Beach, meanwhile, banned alcohol from the beach, along with all alcohol sales after 10 p.m., and sent text messages to tourists warning “Vacation Responsibly or Be Arrested.”

2021-03-22
Previous Post: COVID-19: FG reveals figure of Nigerians vaccinated
Next Post: IRS says more stimulus checks on the way: But when will seniors, others on Social Security get COVID payments?