Live updates: Biden says he plans to run for reelection, expects Harris to remain on ticket 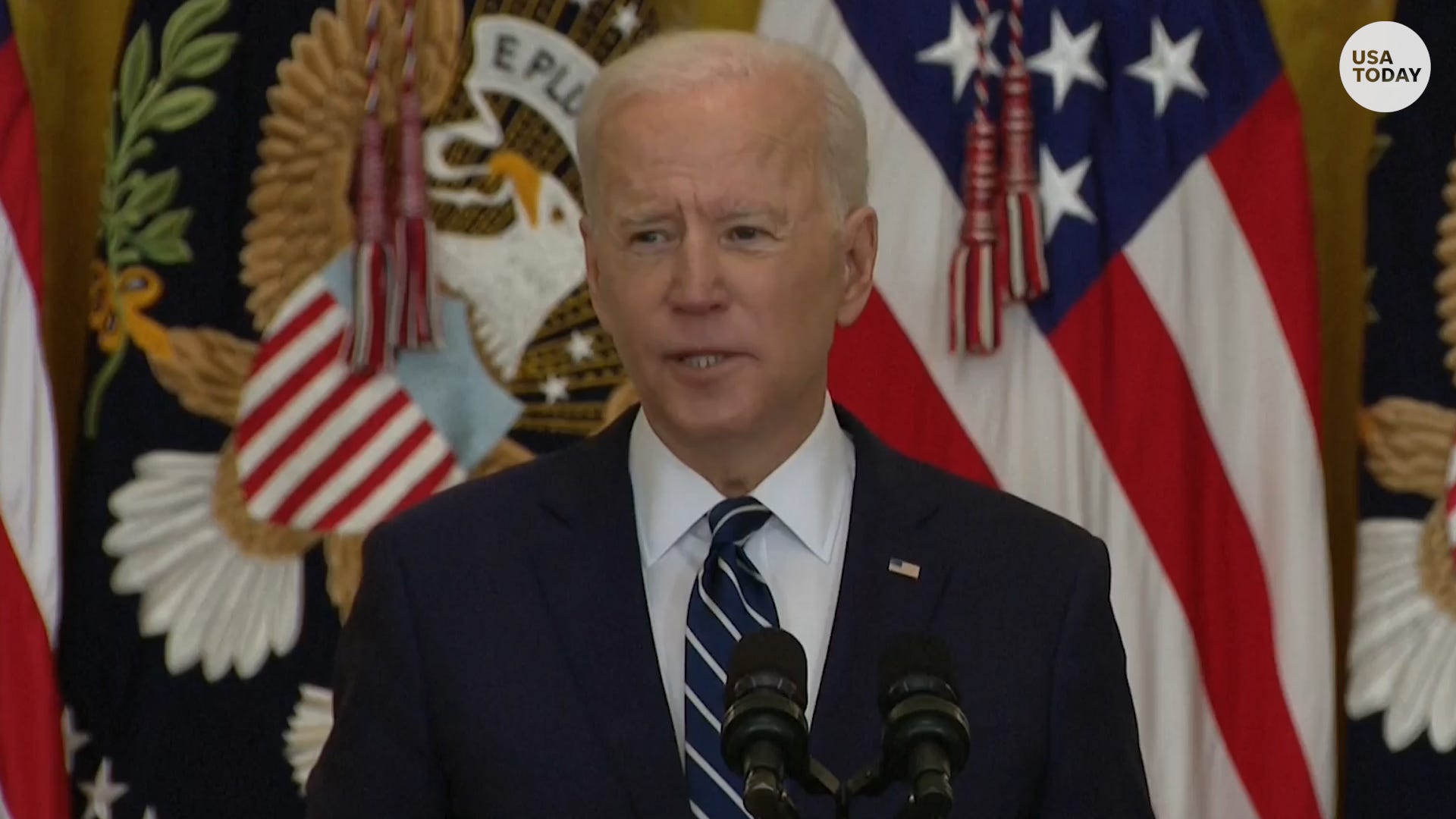 WASHINGTON — Joe Biden is holding his first solo press conference as president Thursday afternoon – his 64th full day in the White House – as new challenges on gun control and an influx of migrants at the southern U.S. border add to an already busy agenda.

Biden has taken longer than his predecessors, Donald Trump and Barack Obama, to formally address the White House press corps, fueling extra intrigue and turning the outing into a highly anticipated event.

Check back for the latest updates.

President Joe Biden said China President Xi Jinping “doesn’t have a democratic bone in his body” as he talked about “holding China accountable to follow the rules.”

“He’s one of the people, like Putin, who thinks autocracy is the wave of the future,” Biden said.

Biden recounted having a two-hour phone conversation with Xi when the Chinese leader called him after he won the election over Donald Trump. Biden said he made clear to Xi that he foresees “stiff competition with China” but insisted they play by international rules.

He also warned Xi about the repercussion of committing human rights violations, telling him, “As long as you violate human rights, we’re going to call it to the attention to the world.”

Biden affirmed that the U.S. will remain the world’s economic leader despite the efforts of the Chinese to replace it.

“That’s not going to happen on my watch because the United States is going to continue to grow and expand.”

President Joe Biden went after Republicans for being concerned about federal spending when Congress was passing the $1.9 trillion coronavirus stimulus package but not bothered by the budget deficit when they were passing tax cuts.

When the spending is saving people’s lives, Republicans don’t think it’s a good idea, Biden said, as he raised his voice. But the GOP has no problem with a lopsided budget when it’s “feathering the nest of the wealthiest Americans,” he continued.

Biden said he is trying to “change the paradigm” to reward work, and “not just wealth.”

President Joe Biden slammed efforts in Republican-led states to pass bills making it more difficult for people to vote, calling it “all by design” to suppress voters of color.

“This makes Jim Crow look like Jim Eagle,” he said of the hundreds of bills in GOP-led state legislatures aimed at voter access. “This is gigantic what they’re trying to do. And it cannot be sustained.”

Biden said even his Republican friends have called out what’s happening.

“Republican voters I know find this despicable, folks outside this White House. I’m not talking about the elected officials. I’m talking about voters.”

He pointed to passage of the voting rights bill H.R. 1 – which passed the Democratic-controlled House but awaits Senate approval – as his top priority to stop the sweeping changes at the state level.

President Joe Biden has been in office just a little over two months, but he said he’s already planning to run for a second term in 2024.

“Yes, my plan is to run for reelection,” he said. “That’s my expectation.”

Biden said he also “would fully expect” that Vice President Kamala Harris would remain on the ticket as his running mate for a second term.

President Joe Biden conceded that the administration is facing challenges in meeting the May 1 deadline for troop withdrawal in the country.

“It’s going to be hard to meet the May 1 deadline,” the president said of removing American troops from Afghanistan, citing “tactical reasons.” Defense Secretary Lloyd Austin and Secretary of State Antony Blinken have both met with regional leaders and allies in recent days to discuss the peace deal.

“We will leave. The question is when we leave,” Biden emphasized.

When asked if the U.S. could still have troops in Afghanistan in 2022, Biden said he “can’t picture that being the case.”

Biden also said the deal brokered by the Trump administration that mandated the May 1 troop withdrawal was “poorly designed.” Former President Donald Trump negotiated a deal between the Taliban and Afghani civilian government in 2019.

Peace talks between the Afghani government and the Taliban have deteriorated over the past year, with Taliban forces regaining control of some segments of the country.

President Joe Biden said he’s consulting with allies on how to respond to North Korea’s recent testing of ballistic missiles, which he said violated a U.N. resolution.

“There will be responses if they choose to escalate,” Biden said.

He said he would pursue addressing the situation through “some form of diplomacy,” rather than just a military reaction. But that would be conditioned on North Korea being willing to give up their nuclear weapons, Biden added.

President Joe Biden defended his immigration policy in response to a question about whether he may be sending a message to immigrants that they can cross the border.

Biden said he would never tell an unaccompanied child who ends up at the border that “we’re just gonna let him starve to death and stand on the other side.”

“No previous administrations did that either, except Trump,” he said. “I’m not going to do it.”

Biden said that is why he has asked Vice President Kamala Harris to lead White House efforts to stem migration at the border.

President Joe Biden said he supports a return to the talking filibuster in the U.S. Senate – not getting rid of the filibuster outright – to pass voting rights legislation and other bills that Republicans are resisting.

“It’s being abused in a gigantic way,” Biden said of the current filibuster rules, which require 60 votes in the evenly split Senate to pass most bills.

He pointed to previous Senate rules that existed when he became a senator in Delaware in the 1970s that required a senator to stand and continue speaking to keep a filibuster alive.

“Guess what?” Biden said. “People got tired of talking and tired of collapsing. I strongly support going in that direction.”

“We’re going to get a lot done,” Biden predicted.

President Joe Biden said he should be flattered that people think there’s an increase in immigrants coming to the border because “they know Biden is a good guy.”

But that’s not what’s happening, he said.

Instead, Biden said the recent surge is cycle. There was a similar surge between January and March last year because that’s when it’s safer to travel through the desert heat, he said.

President Joe Biden addressed questions of his policy priorities during his presidential press briefing, noting that the administration would soon pivot from the its focus on the ongoing coronavirus pandemic and economic fallout to other aspects of his agenda.

“The most urgent problem I stated for the American people was COVID-19 and the economic dislocation,” many have experienced during the pandemic, Biden said. The president, however, noted that with its desired stimulus package enacted and being deployed, the administration will now turn to “long term problems” like immigration reform, gun control and infrastructure.

“My Republican colleagues are going to have to determine whether we can work together or whether they will decide to … divide the country and only pursue the politics of division,” Biden cautioned about passing legislation in Congress.

The president said that the administration would “move on these one at a time and we’re going to get to as many of these as we can,” but did not specify any policy prioritization.

“I know it’s ambitious, twice our original goal,” he said. “But no other country in the world has even come close. Not even close to what we’re doing. I believe we can do it.”

Over his long political career, Biden has made his fair share of gaffes. But he’s stayed largely on script during his young presidency with a focus on leading the nation out of the COVID-19 pandemic.

That discipline will be tested Thursday as reporters, for the first time besides brief interactions with the president, have an open arena to question Biden.

In the wake of two deadly mass shootings in the last week, in Georgia and Colorado, Biden has said “we have to act” to pass gun background checks and ban assault weapons. That agenda is already facing resistance from Republicans.

Biden is also facing increasing heat over the increase of migrants at the U.S.-Mexico border. Republicans have called the situation a “crisis” of Biden’s doing while the White House has resisted that term.

Both issues are likely to come up Thursday. 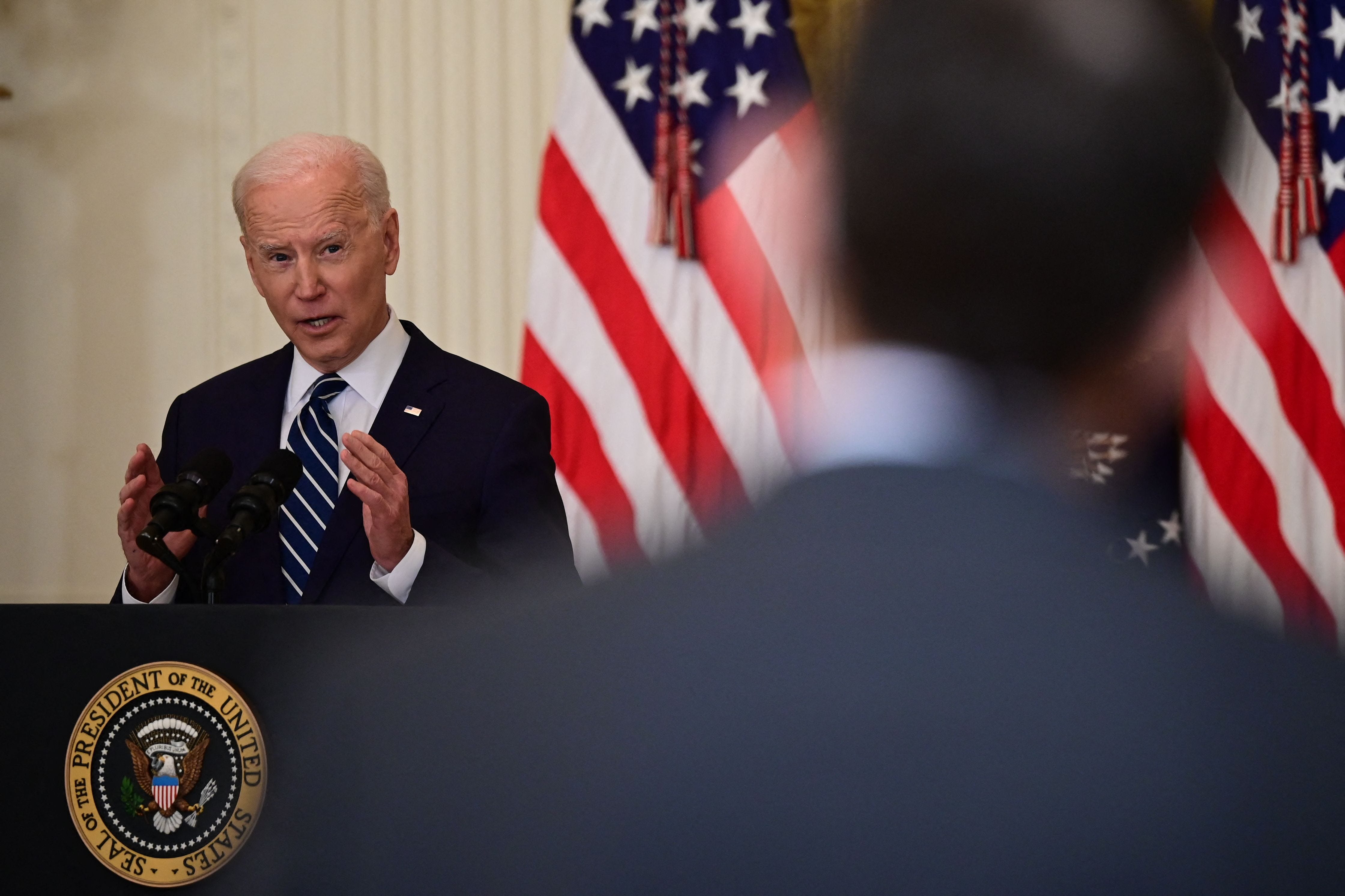 2021-03-25
Previous Post: A skyscraper-sized cargo ship remains wedged in the Suez Canal, the first time in the canal’s 150-year history
Next Post: Pregnant women who get Covid vaccine may pass immunity to newborn, study finds