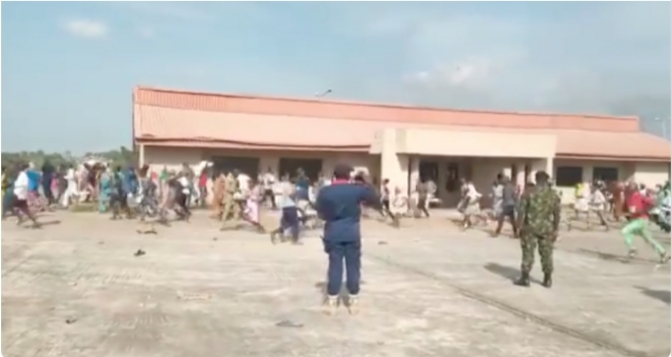 Reports indicated that many people feared dead on Friday when security operatives opened fire on a warehouse containing COVID-19 palliatives in Ilorin, the capital of Kwara state.

This incident reportedly happened when warehouses in cargo terminal area and Agro mall in Kwara state were looted with items such as spaghetti, noodles, salt and sugar carted away.

It was learnt that security agents opened fire which led to confusion and escalated the disorderliness as part of measures to restore order when one of the warehouses was being looted.

Reacting to the ugly incident, the Kwara state commissioner for communications, Harriet Afolabi-Oshatimehin in a statement on Friday condemned the looting of the warehouses, and explained why the items were yet to be distributed.

“The remaining palliatives in the terminal, which the hoodlums preyed on until chased away by security agencies, were meant for special vulnerable groups and just one local government where names of the beneficiaries have just been delivered and officials have started distributing when the street urchins breached the wall of the facility,” she said.

“It would be recalled that the CACOVID and the state government had since September 23rd flagged off the distribution of the palliatives. But it was meant for specific households, as dictated by CACOVID, and so names had to be properly generated to allow for transparent and orderly distribution.

“The actions of the hoodlums are condemnable and those already arrested would face the full weight of the law. The government would not tolerate anyone hiding under any guise to disrupt the peaceful atmosphere in the state.

“The government commends the security agencies for acting with restraint in the face of provocation by the hoodlums.”

Following the incident, Abdulrahman Abdulrazaq, governor of Kwara, has declared a 24-hour curfew beginning at midnight on Friday.