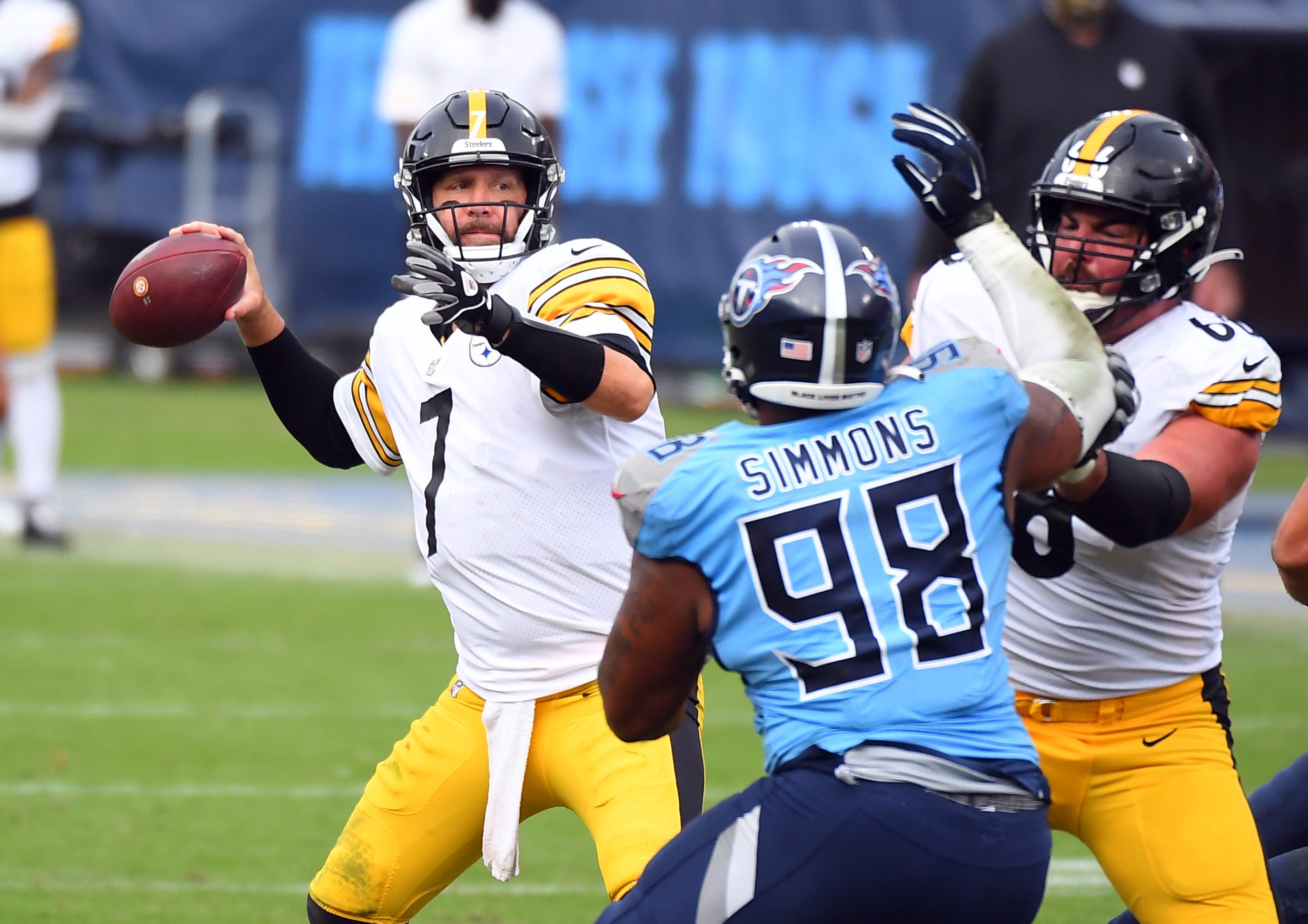 Steelers legend says defense is key to getting Roethlisberger another ring

The NFL is at its approximate halfway point, and Week 8’s games offered a little more clarity about the league’s current power structure.

And the biggest domino to fall came in the AFC North, where the Pittsburgh Steelers narrowly outlasted the Baltimore Ravens in what has become the best rivalry in football. We also saw a heralded rookie quarterback notch his first career start in Miami and the most consistent dynasty of the last two decades, the New England Patriots, continuing to show concerning flaws.

Here are the winners and losers from Sunday’s Week 8 action.

The early front runner for Coach of the Year, Steelers coach Mike Tomlin has his team playing like the most dangerous group in the NFL. Pittsburgh (7-0) toppled the Ravens in a hard-fought, 28-24 victory on the road and remained the only undefeated team left standing in the NFL. And while Ben Roethlisberger is playing well and the young Steelers receivers are making plays, the defense is this team’s strength.

At first glance, it may have looked to be a poor game for the unit. Baltimore gained 457 total yards, including 265 on the ground. But it’s Pittsburgh’s aggressive pass rush and ball-hawking ability that gives it a chance to win. The Steelers sacked Lamar Jackson four times to give them an NFL-best 30 on the season. But Jackson also had two interceptions and lost two fumbles. The Steelers scored 14 points off those turnovers and forced a Jackson fumble on a huge fourth down late in the game that sealed the result. There’s still half of the season left to play, but Tomlin has his team playing like a Super Bowl contender. And, in a momentous accomplishment, Tomlin surpassed his mentor in Tony Dungy with his 140th regular season victory, most ever by a Black head coach.

Whoever faces the NFC East champion in the playoffs

The Philadelphia Eagles won Sunday night’s game, 23-9, but perhaps they should feel worse than the Dallas Cowboys, who were starting a third-string rookie quarterback drafted in the seventh round. Somehow, the hapless Cowboys threatened the Eagles until a questionable fumble return for a touchdown put the game out of reach.

Quarterback Carson Wentz committed four turnovers, and Philadelphia couldn’t exploit a historically inept Cowboy defense. Both teams combined to convert just seven of 24 third-down tries and two of seven fourth-down attempts. They committed six total turnovers. The Eagles (3-4-1) strengthened their first-place lead in the NFC East, gaining distance from the Cowboys. That’s all to say that whoever wins the NFC East and gets to host a playoff game almost certainly won’t be a tough out. That should make the seeding involving an NFC wild-card berth quite interesting down the stretch.

Maybe this is the spark that the Minnesota Vikings need to turn their season around. Cook, Minnesota’s running back, went off in a 28-22 victory against the NFC North-rival Green Bay Packers. Cook was the team’s leading rusher (163 yards) and receiver (63) and scored four total touchdowns.

Dalvin Cook gained +54 rush yards over expected and generated +10.1 total EPA on the ground (2nd-most by an RB in a game this season).

Cook leads the NFL with +153 rush yards over expected and leads all running backs with +23.7 EPA on rushes this season.#MINvsGB | #Skol pic.twitter.com/bgdF459dhZ

Green Bay’s inconsistencies in run defense are a significant problem, but Minnesota might have shown that riding Cook is its best chance at competing. To be clear, at 2-5, the Vikings are still in a huge hole. But Cook appeared to be fully healthy after missing one game with a groin injury. While quarterback Kirk Cousins continues to struggle, if Cook can keep, well, cooking, it eases the pressure off Cousins and keeps the Minnesota defense fresh.

Let’s start off by saying this: the Miami Dolphins offense put forth a forgettable performance in a 28-17 victory against the Los Angeles Rams, with all points being scored in the first half. But Miami (4-3) is very much in the race for the AFC East crown.

Tagovailoa’s debut as a starter was very pedestrian, with the rookie going 12-of-22 for 90 yards with one touchdown and one fumble. Miami had 28 points before intermission but only 54 total yards. The offense looked sluggish and couldn’t stay on the field, converting only three of 12 third-down attempts. And, if not for Miami’s four forced turnovers (including a 78-yard fumble return for a score) and a Jakeem Grant 88-yard punt return for a touchdown, Tagovailoa might not have celebrated his first victory. Still, this shows that the Dolphins have complementary phases that can help win games, even when the offense struggles. That’s reassuring for a rookie starter. But, unquestionably, Tagovailoa needs to be better in the future if Miami is to actually compete in the division, especially with a trip to face a good Cardinals squad looming next week.

Tua Tagovailoa became the 1st QB to win his 1st career start with fewer than 100 Pass yards and 20+ attempts since Donovan McNabb in 1999. pic.twitter.com/CqyGciYCuY

Again, they squandered a sizeable lead. And again, they’re slipping down the AFC West. On a last-second touchdown pass from quarterback Drew Lock, the Denver Broncos came from behind to beat the Chargers, 31-30. This has been a recurring issue for this team. Loaded with talent, they simply cannot hold onto their leads. In the past, it had been special teams blunders and careless turnovers on offense. But this year’s preferred method of collapse has been defensive lapses.

L.A. has blown double-digit leads in each of the last four games. Three of those were losses, and the smallest blown lead in that span was 16 points. And nearly each time,  the Chargers wasted a solid performance from rookie quarterback Justin Herbert. Now sitting at 2-5, Los Angeles is in last place in the division, and coach Anthony Lynn is fielding questions about his job security.

It’s rare to put him on this side of the list, but the Patriots look very much like a squad that will miss the postseason for the first time since 2008. After quarterback Cam Newton fumbled during a last-gasp effort to steal a victory away from the Buffalo Bills, the Patriots fell, 24-21. This is New England’s fourth consecutive loss, tied for the longest streak ever in Belichick’s Patriots tenure.

Many will think this has a lot to do with Tom Brady leaving, but even if TB12 were still in Foxborough, he’d have a tough time winning with this roster. No team had more COVID-19 opt-outs than the Patriots, who haven’t been able to make up the loss of key veterans like linebacker Dont’a Hightower and safety Patrick Chung. Receiver, running back and tight end are all lacking in star talent. That’s evident in offensive coordinator Josh McDaniels’ game plans, in which Newton is essentially the main option when the game is on the line. But New England’s misses in recent drafts haven’t replenished a now-thin roster, and a rebuild is inevitable.

No team has been more banged up this season than San Francisco, which was dealt some more bad news on the injury front in a 37-27 loss against the Seahawks. Quarterback Jimmy Garoppolo aggravated a right ankle injury and All-Pro tight end George Kittle sustained a foot injury. After the game, 49ers coach Kyle Shanahan said Kittle’s X-ray didn’t show any fractures, but he noted that the tight end would go further evaluation Monday.

Making matters worse, San Francisco (4-4) fell to last place in an ultra-competitive NFC West. Making matters even worse, the Niners have only three days of rest to mend those injuries before a showdown with the Packers. If this rash of injuries continues, it’s hard to see the reigning NFC champions making it into the postseason.

Entering last Sunday, they were one of three undefeated teams in the NFL, looking like they would be a force in their division and potentially even in the AFC. Flash forward and now the Titans are reeling. They’ve lost two in a row, the latest 31-20 against a Cincinnati Bengals squad that had shown improvement but still had just one victory entering the day.

And though Tennessee’s offense struggled until the game was already out of hand, most concerning is that the Titans defense looks like it could be a fatal flaw. And, in particular, the Tennessee pass rush simply cannot generate enough pressure to affect disrupt Bengals rookie quarterback Joe Burrow. For the second week in a row, Tennessee failed to get one sack. The Titans now have seven on the season and are tied for 30th in that department. With no viable pass rush, Tennessee routinely lets opposing passers sit back and dissect the secondary.Burrow (26-of-37 for 249 yards and two touchdowns) did just that.