Nigerians should not give up on our country, says Ekiti Gov Fayemi 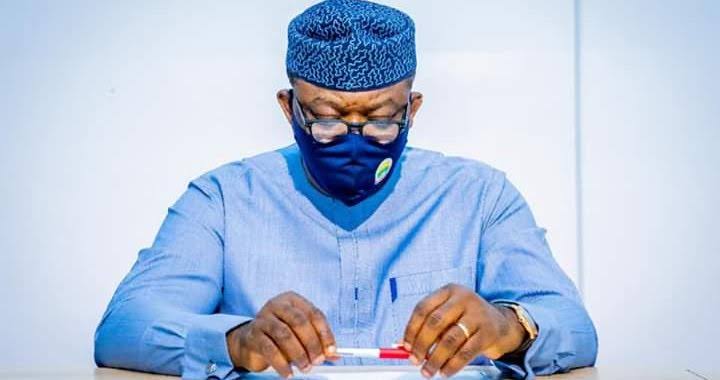 The Executive Governor of Ekiti State, Kayode Fayemi has requested Nigerians not to give up on the country “in its slow journey towards nation-building”.

This request was made by the Ekiti State Governor while delivering an address at the 50th anniversary of the Centre for Historical Documentation and Research otherwise known as Arewa House in Kaduna.

The governor said the United States which Nigeria emulates has not stopped working towards having a perfect nation.

Arewa House, which was established in 1968, is a research center attached to Ahmadu Bello University, Kaduna.

Fayemi asked Nigerians to tenaciously hold on to the dream of the founding fathers of a better country because the task of nationbuilding is never completed.

“Nation-Building is a continuous work in Progress. Renowned Nigerian author, Ben Okri in his award winning book, The Famished Road, tells of a people who, for several generations have been trying to build a road. But no matter how hard they work, they never go far in their endeavour. Even then, whatever little progress they make, is always destroyed by disasters beyond their comprehension and they would have to start all over; much like the curse of Sisyphus. Yet, every generation understands that it is its destiny to try and complete this road. History has taught them that the road would never be completed, but they never give up because each generation hopes that it would be the generation that gets the job done. Several commentators have noted that Okri’s unfinishable road is in fact, a grand metaphor for nation-building.

“However, in relating this story to our country, Nigeria and our own efforts at nation-building, rather than the collapsing road, I would think in terms of an infinite wall of greatness with the natural potential to reach far beyond the skies. It is the destiny of every generation to build on this wall, and take it to a higher level, even though we know that the job will never be done because there is no real limit to how high we can build. Reflecting on our recent history, it is easy to point at our many false starts, or even several instances when we have out-rightly betrayed our generational mission. We may indeed wonder that despite the great efforts of the past sixty years, how come this great wall has barely left the foundation stage, even with our enormous wealth of bricks and mortars and expert builders?

“Sixty years may be a long time in the life of an individual. But a sixty-year-old nation, is a nation yet in its infancy. Therefore, rather than despair over the failures of the past, I would be more productive that we look ahead with great hopes at the infinite future that lies ahead of us, armed with that immortal admonition from the French West Indian psychiatrist and political philosopher, Frantz Fanon that “every generation must, out of relative obscurity, discover its mission, betray it or fulfil it.

“Over the years, Nigerians have agonised over the lamentably slow pace of our development. Successive governments and policy makers have responded with various approaches and strategies for achieving the much desired national development. Yet, even the most charitable analyst of our political economy would agree that we have not performed to our optimum capabilities. It appears to me however that the fundamental challenge is that all along, we have been placing the cart before the proverbial horse. Before we can think of development, we must first solve the problems of nation-building, because you cannot develop what you do not have.

“For the next one thousand years, no matter the progress we would have made, as long as this country continue to exist, generations after generations, will continue to seek “to build a nation, where peace and justice shall reign.” It is credit to the genius of whoever invented that line that both the mission and the means to achieve the mission is captured in one simple phrase. The path to nation-building is peace, the path to peace is justice, and the path to justice is equity and inclusion. Even for Americans who coined the mantra, of “a more perfect union’, it was done out of the understanding that the work of nation building is never done. If a country like the United States, forged out of a common purpose and common consent, perpetually seeks to make a more perfect union, we have no excuse to give up on the task of nation-building in Nigeria.”

Fayemi said the “unity in diversity” component of Nigerians shows that the slow but dynamic process of nation-building can collectively be taken to an enviable height if everyone commits to it.

The post Nigerians should not give up on our country, says Ekiti Gov Fayemi appeared first on Within Nigeria.