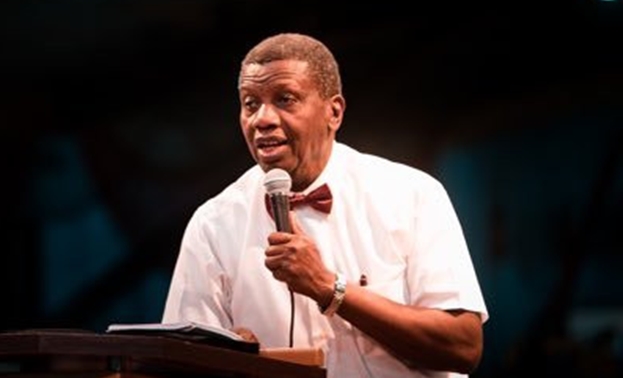 The General Overseer of the Redeemed Christian Church of God (RCCG), during a sermon titled ‘Divine Lifting’ and delivered at the Church headquarters in Lagos yesterday January 4,  expressed displeasure over the restrictions on crossover services which made it impossible for Christian denominations to hold the traditional vigil on December 31.

Recounting how he instructed members of his church to observe the crossover in their homes, the Pastor stated that it was funny to him to cross over by 10pm on December 31.

Wondering why authorities were afraid of people being infected with the virus at the midnight service, Pastor Adeboye said nobody told him that Coronavirus is a witch because it is only witches that fly at night.

“I found it funny because nobody has told us yet that Coronavirus attacks people at night. Nobody told us that Coronavirus is a witch because it is only witches who fly at night, and if the virus is a witch, then it means it can hear. If I am a witch and I hear that the people I want to kill would have run away to their houses by 12 midnight, then I would kill them by 11 or 10.

“But I’m telling you this so you won’t be afraid. There is fear in the air and fear is a killer. The way things are going, some people would die of hypertension just because they are afraid. When I say relax, I don’t mean you should be careless.”

Pastor further stated that he would comply with every rule instituted by government to curb the spread of Coronavirus, but would not refuse to perform his duty as a pastor and husband.

“Obey the government by wearing your masks, washing your hands and observing social distancing as much as possible. In church, the ushers put a big stool between me and my wife, but I removed the stool because no one can put a distance between me and my wife. Social distancing wouldn’t stop me from laying hands on the sick so that they can recover, that’s my duty and I would continue to do it.

“There is nothing wrong in complying with the rules, as you can see I am also wearing the mask and washing my hands regularly because the government is trying to save us all and we have to comply at all cost.

“As a church, we have put all in place to make sure we comply with the government but as for me, I will not allow social distance to keep me from my wife and healing the sick by laying hands on them, it is my duty as a man of God.

“God called me and said that Redeemed Christian Church of God is his church and he has vowed to protect his church. We are under the protection of God and there is no need to be afraid.

“We will survive this period. Ebola came, we survived, Coronavirus has come and we will survive as long as we keep on praising God.”

The post Nobody told us that Coronavirus is a witch – Pastor Adeboye knocks CAN and FG over ban on crossover services appeared first on Within Nigeria.