OSUN 2022: Will Omisore be able to rescue Oyetola from Aregbesola’s grasp? 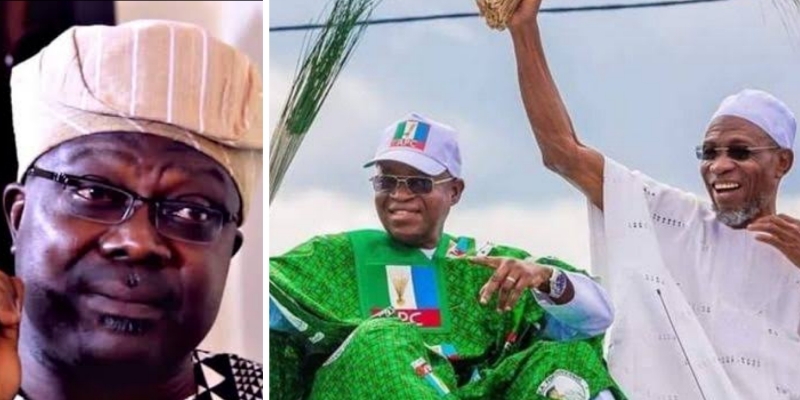 Barely 2 years after former governor of Osun State and current Minister of Interior, Ogbeni Rauf Aregbesola took a compulsory leave from discussing Osun politics in public, it is quite relieving that he has ended the forceful leave.

On Friday, Feb. 19, Aregbesola stormed his hometown, Ilesa to participate in the ongoing APC revalidation exercise but he did not end his leave peacefully. Aregbesola did not come with only songs and dance as usual but he came with a message of threat and class.

At the revalidation exercise, Ogbeni Rauf Aregbesola declared that new entrants such as killers and miscreants have joined the ruling party, All Progressives Congress and reminded his audience about the sad loss of Bola Ige. He also declared that whoever denigrates Bola Ige is the enemy of the progressives and those who want to use Bola Ige’s tomb to climb to a higher height would not achieve their aim.

Aregbesola in a viral video said “Killers have joined our party and the law guiding our party doesn’t say we can’t admit them when a law court has not convicted them. You know the killers or you don’t know them? You know miscreants or you don’t know miscreants? If we will be in the same party, we will not accept anything that will denigrate Bola Ige. He was our father. In this area, Bola Ige was our father. Are you happy that Bola Ige was killed? I am a son to the late Bola Ige. Whoever denigrates Bola Ige is our enemy. Whoever wants to use Bola Ige’s tomb to climb to a higher height would not achieve his aim. When we want to aspire for a position here, your name and antecedent will determine how you will be treated.”

Who are the new entrants in Osun State? Senator Iyiola Omisore and his followers. They recently joined the party after months of promising and sucessful coalition between their party, Social Democratic Party and All Progressives Congress. Recall that Omisore was persuaded by some APC chieftains to form coalition with the ruling party as the state await the rerun election. Omisore who was comfortable with the offers of the APC rejected the party (PDP) that made him a senator and combined efforts with the APC to win the rerun and later joined the party officially.

Aregbesola is a deadly political strategist. He has no respect for fear. He has a history of taking battles to people’s domain and ended up making mockery of their strength. Aregbesola has a long list of politicians he has not only belittled but beaten to the game and Omisore’s story is no different. He has been shattered with mouth and capacities. From being an alleged killer to a miscreant and top political hoodlum, Aregbesola used Senator Omoworare to make Omisore taste electoral misfortune before he was finally defeated in a guber contest despite federal might. How Aregbesola stole people’s hearts, became Osogbo’s demi god, the approaches and strategies still remain mystery to many.

Aregbesola is also courageous to a fault. During the 2019 presidential campaign in Ogun state, when others were unnecessarily calm and quiet with the political patronage of then Governor of Ogun State, Ibikunle Amosun, Aregbesola was the only APC chieftain who gallantly mounted the podium, spoke like a brave and told the large crowd that All Progressives Congress, APC is one and all candidates of the party must be voted one.

The political brawl between Aregbesola and his ex-top aide now governor started after the rerun election. Oyetola and some candidates of the ruling party who are aggrieved over electoral misfortunes they suffered at the polls rolled out plans to cut Aregbesola loyalists into sizes. These aggrieved candidates believed that Aregbesola was the cause of their defeats. Oyetola and his boys also concluded that the guber poll would have been easier to win if Aregbesola had earlier declared support for his ex-top aide. To punish Aregbesola and cut the wings of his loyalists, Oyetola did not sign overdrafts and handed over commissioner and advisers slots to Omisore led coalition caucus.

Why did Oyetola choose Omisore over Aregbesola despite the political dexterity and sterling records of the latter? Many political analysts who are loyal to the ruling party have not found answer to this question. It is simple. Oyetola is now on the throne. He wants to reign, breathe freely and prefers an ally with less priorities than a troubling kingmaker. Oyetola does not want Aregbesola to be Jagaban of Osun politics. Sadly, that is the greatest desire of Ogbeni Rauf Aregbesola.

Iyiola Omisore did not come to laugh in APC at all. He is always dominating any party he moves in. He came to PDP as an adopted son, struggled to become head of the family he was not born to and took away almost half of their inheritance. Omisore came to play the game he knows best, the internal party politics. He is ready to take over the party affairs but he has a major challenge, sharing same senatorial district with Aregbesola, the man who has defeated him at every contest. Aregbesola is a child of history. He has read and seen how Omisore took over parties that clothed him and that was why he came to Ilesa to drop a clear message of class. The buck now lies on Oyetola’s table who has a duty of managing the excesses of two dominating political giants.

To cut Aregbesola and his boys to their sizes, Oyetola has no doubt found in Omisore a shoulder to lean on. Will Omisore not become so strong, rigid and powerful in the process of Oyetola cutting his former benefactors into sizes? For every action, there will be consequences. Oyetola is no doubt a politician but he knows what he wants and he would go for it. Oyetola does not want to be smoked out in party politics, poll and the best way to make it happen is to dine with his ex-political enemy now ally. At present, that is more important for him.

Omisore understands the politics of Ife Kingdom very well. Although luck sometimes does not smile at him but he has successfully controlled Ife kingdom at the polls and inarguably the first politician to emerge winner of a poll from the prison. Even when he was defeated with more than 100,000 votes by Ogbeni Rauf Aregbesola, Omisore did not lost ife’s grip. Truly, Omisore is also a great strategist when it comes to election and party politics but he has only garned ife votes as an aspirant not as a supporter. Will Omisore be able to deliver ife votes for Oyetola in 2022 when he would not be the one on the ballot paper?

The future is pregnant. 2023 election will be very interesting, deadly and moment of reward. For Ekiti, Osun and Anambra states, interesting times will be nearer. Ekiti and Osun states will be testing grounds for the 2023 electoral battle. On Friday, February 19, Aregbesola came to deliver the message of a particular group he represents. He does not talk when he’s not prepared. Now that he has spoken and Omisore is also ready to resist him, will Oyetola survive this looming political disaster?

Now that the Executive Governor of Osun State, Adegboyega Oyetola has abandoned his former boss and benefactor, will Omisore be able to fill in the vacuum left by Aregbesola considering his inputs in 2018 guber election? Lest I forget, Aregbesola structures gave the ruling party, All Progressives Congress 250,000+ votes in the last guber poll not Oyetola or Omisore structures. To rescue Oyetola from Aregbesola’s grasp, Omisore will have to work really hard, unite caucus and let go of his ambition if he has any.

My name is Lawal Sodiq Adewale (Apagunpote Olayimika Chocomilo). I write from the ancient town of Osogbo, the capital of Osun state.

The post OSUN 2022: Will Omisore be able to rescue Oyetola from Aregbesola’s grasp? appeared first on NEWS.