Skip to content
Trending
12-year-old boy murders father for accusing him of stealing his GHC70 in Ghana
COVID-19: Gambian president declares state of emergency
Trending
Mega Millions $1 billion jackpot is the third largest in US history. The winning ticket was sold in Michigan.
Logged out of Facebook? You’re not alone and Facebook blames configuration change for logouts
‘Jeopardy!’ ends in a rare two-way tie, forcing a winner-take-all showdown clue

Report: Larry King has been hospitalized with COVID-19 for more than a week 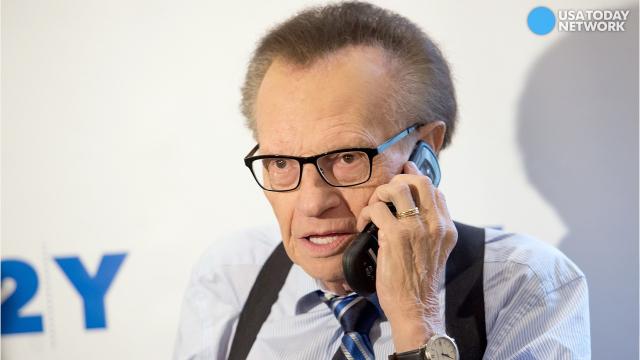 Legendary TV host Larry King has revealed his battle with lung cancer, and opened up about the diagnosis to “Extra’s” Mario Lopez.

Larry King has been hospitalized in Los Angeles with COVID-19 for more than a week, CNN reported Saturday.

King, 87, a Peabody Award-winning broadcaster and former USA TODAY columnist, has been among America’s most prominent interviewers of celebrities and newsmakers during his lengthy career.

King’s coronavirus diagnosis is the latest in his health ailments.

Aside from surviving a heart attack in 1987 and undergoing quintuple bypass surgery, which prompted him to quit a lifelong three-pack-a-day cigarette habit and lose weight, King also suffered a near-fatal stroke in March 2019. He was in a coma for a couple of weeks after undergoing a heart procedure to insert stents.

Speaking with People earlier this year, King shared how the stroke affected his views on death, as well as why he filed for divorce from his seventh wife Shawn Southwick King. He has been married eight times to seven women.

“I have less of a fear of dying now,” King said. “It is what it is. I just want to keep working until the end. I’d like to die at work – I’ll retire right there!”

In April 2019, he had a heart procedure to insert stents to reopen his previous bypass.

In September 2017, King revealed that he had been diagnosed with lung cancer, saying doctors noticed a Stage 1 tumor during his annual chest X-ray. He underwent surgery at Cedars-Sinai to remove what turned out to be a malignant tumor.

Last summer, King mourned the death of two of his children, Andy and Chaia King, who died within weeks of each other.

King shared the news of both deaths simultaneously on Instagram: Andy, 65, died “unexpectedly of a heart attack on July 28” and Chaia, 51, “passed on August 20, only a short time after having been diagnosed with lung cancer.”

“It is with sadness and a father’s broken heart that I confirm the recent loss of two of my children, Andy King, and Chaia King,” he wrote. “Both of them were good and kind souls and they will be greatly missed.”

King started his career in Miami radio before moving on to TV and newspapers. His nightly CNN program, “Larry King Live,” remained the network’s top-rated show throughout his tenure.

By his count, he has interviewed more than 60,000 subjects, and when his run on cable ended in 2010, he segued to the Internet with a daily talk show on Hulu.com.

Larry King speaks out: His children Andy and Chaia died within weeks of each other