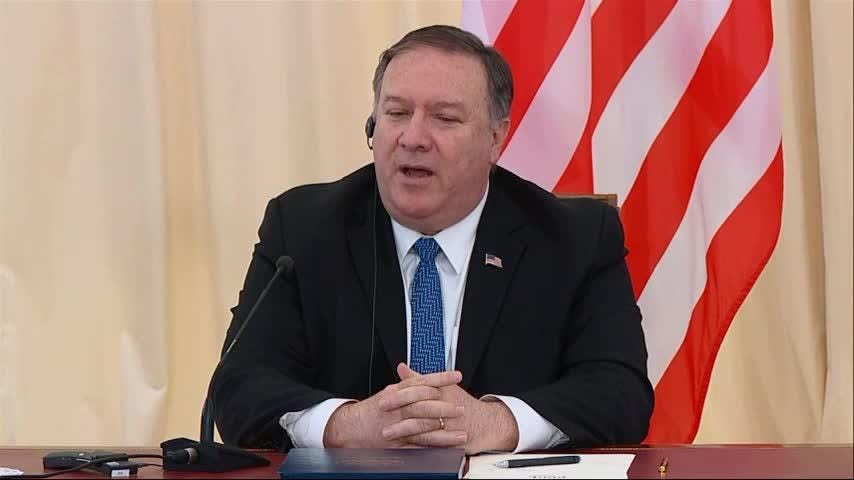 WASHINGTON – Russia and Iran engaged in multi-faceted, covert influence campaigns aimed at swaying the outcome of the 2020 presidential election, according to a declassified assessment released Tuesday by U.S. intelligence officials.

The report from the Director of National Intelligence said U.S. officials did not find evidence that foreign actors tried to alter “technical” aspects of the voting process, such as voter registration files or vote counting.

But some U.S. adversaries, including Iran and Russia, “spread false or inflated claims about alleged compromises of voting systems to undermine public confidence in election processes and results,” the report says.

Those two countries also engaged in broader efforts to undermine U.S. public confidence in the election and help their preferred candidates in the 2020 contest, the DNI report concludes.

Russia’s efforts became clear as the campaign got underway. A key element of Russia’s attacks on Biden centered on false allegations that Biden, while vice president, sought to have a Ukrainian prosecutor fired so that he would not investigate his son, Hunter Biden. (Hunter Biden was on the board of a Ukrainian gas company, Burisma, when his father was vice president.)

The report specifically names Andrii Derkach, a Ukrainian politician, as acting on behalf of Putin to try to discredit Biden. During the campaign, Derkach met with Rudy Giuliani, who was then serving as Trump’s personal attorney, as part of the influence campaign. The Trump administration sanctioned Derkach for his interference even as Trump’s allies continued to promote his false allegations.

“Russia ran a successful intelligence operation that penetrated the former president’s inner circle,” Rep. Adam Schiff, chairman of the House intelligence committee, said in a statement Tuesday. He said the DNI report confirms that Russia agents “laundered misinformation into our political system with the intent of denigrating now-President Biden and damaging his candidacy.”

But the intelligence analysis found that Russia’s 2020 influence operation was not as extensive as its 2016 effort, when Kremlin operatives hacked into computers used by Democratic Party officials and released emails to hurt then-Democratic nominee Hillary Clinton’s campaign.

“Unlike in 2016, we did not see persistent Russian cyber efforts to gain access to election infrastructure,” the report says.

“We assess that Supreme Leader (Ayatollah Ali) Khamenei authorized the campaign and Iran’s military and intelligence services implemented it using overt and covert messaging and cyber operations,” the report said.

China considered trying to meddle in the election but did not, the DNI report said, although one agency disagreed with that conclusion.

“China sought stability in its relationship with the United States, did not view either election outcome as being advantageous enough for China to risk getting caught meddling, and assessed its traditional influence tools – primarily targeted economic measures and lobbying – would be sufficient to meet its goal of shaping U.S. China policy regardless of the winner.”

In a dissenting note, a cyber intelligence official said China took “at least some steps to undermine former President Trump’s reelection chances, primarily through social media and official public statements and media.” But that official agreed with the broader intelligence community’s view that Beijing was “primarily focused on countering anti-China policies.”

“The good news is our capability to protect our core election functions has gotten better,” said Warner, D-Va. But the report also showed that America’s foreign adversaries “are still actively trying to interfere” in U.S. elections.

Before the election, Trump and his allies often downplayed the threat of Russian election meddling and instead highlighted allegations that China and Iran were trying to interfere. Trump also promoted false claims that Democrats’ efforts to expand mail-in voting could lead to foreign countries printing ballots and undermining the results.

After losing the 2020 presidential election, Trump and his supporters waged a relentless campaign of disinformation about election interference and voter fraud. Among the false claims promoted by Trump’s allies was the assertion that Hugo Chávez — the deceased former president of Venezuela — owned part of a voting system company whose machines were used in numerous states.

After the release of Tuesday’s intelligence report, officials at the Justice and Homeland Security departments made an oblique reference to those claims – stating they were never substantiated.

The DNI report said some other foreign governments, including Cuba and Venezuela, engaged in smaller scale activities surrounding the election.

The Venezuelan regime of Nicolas Maduro “had the intent, though probably not the capability, to try to influence public opinion” against Trump, the report said.

What really happened when Biden forced out Ukraine’s top prosecutor

Who’s going to derail the U.S. presidential election? The culprit may be close to home