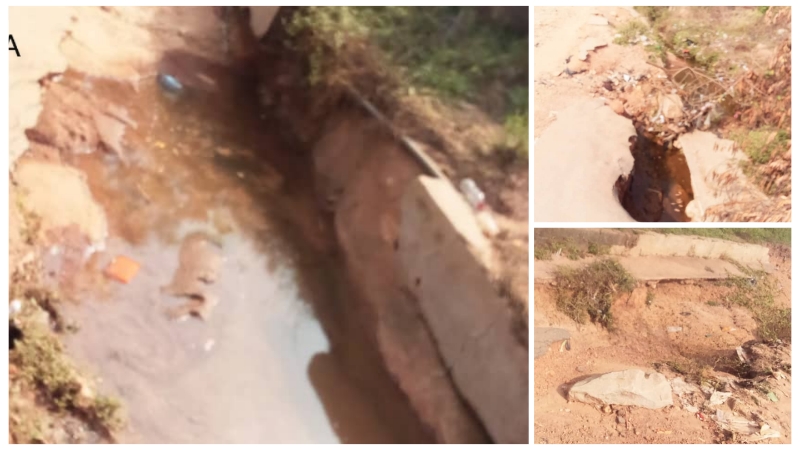 Despite the dedication of the former governor of the state, Ogbeni Rauf Aregbesola and his successor, Adegboyega Oyetola towards road construction and repairs in Osogbo, the capital of Osun State for 10 progressive years, there are still some roads in a very disturbing, terrible and heart-wrenching state.

One of such roads in the state capital is the road connecting John Mackay Primary School, Oke-Ayepe, Oshogbo-Ilesa road to Oke-Baale. Residents normally come together every year to fill up the pothholes with stones and sands in their efforts to make it motorable but the holes have become death traps; now wider, dangerous and deadly. When WITHIN NIGERIA reporter visited the community and saw the road, it was a complete eyesore.

This reporter left his residence for Osogbo as early as 7:04a.m but got to Osogbo 8:01 a.m. The road made the journey a hell for us. Oke-Ayepe, a community in Osogbo, the capital of Osun state is quite unlucky and very unfortunate. All the roads in the community are in terrible state. As this reporter highlighted from the bus after minutes of watching helplessly as the bus dribbled potholes on the road, he came across two structures; a dying school, terrible and neglected road. The lamentation of the motorcyclist who conveyed WITHIN NIGERIA reporter to the spot could block ears. He decried the terrible state of the road, saying vehicles, motorcycles often get faulty after plying the road and begged the state government for intervention.

The road linking John Mackay Primary School, Oke-Ayepe Oshogbo-Ilesa to Oke-Baale is in a deplorable state, completely annoying and exasperating. The road suffers same fate with the dying school. This particular road is not only prone to accident but already a sad tale for residents and road users especially commerical motorcyclists. The road is greatly affected by erosion and its neglect has worsened the situation.

There are deep holes on the road, these holes are deepening more and more. The drainage system is already collapsed and when there’s heavy rain, all these deep holes are always filled with erosional water (ponds) owing to the collapse of the drainage. Motorists always avoided plying the road and when they are forced to do so, they take extra charges because it requires extra effort to ply the road. Findings revealed that the road was constructed in the early 20s and it was abandoned after its construction.

A 35-year-old resident identified as Kazeem who spoke with WITHIN NIGERIA reporter expressed concerns over the deplorable state of the road and told our reporter about the letters they’ve forwarded to concerned bodies in government for the rehabilitation of the road.

‘We also contacted people we know in government but all efforts were futile. There was a time an agency came to check the road and interviewed some residents yet there was no positive development. That is how we have been plying it for years and we lament every year with no solution at sight, a rather troubled resident said.

Another resident simply identified as Iya Monsurat told WITHIN NIGERIA reporter that they (residents) have been complaining bitterly and struggling with the road challenges for years now without any assistance from the state government and this has affected the positive growth of economic activities in the locality.

“There were clusters of shops (containers) here before some shop owners left, remaining few. People think twice before coming here. They find it hard to come here because of the abandoned road. Some vehicle owners park their cars at some distance away from the road and take a long trek into the community from the T-junction because they do not want to ply the road, she said.

WITHIN NIGERIA reporter met with a commerical motorcyclist identified as Kamoru Aladejobi who decried the woeful state of the road and eventually appealed to the state government to repair the road.

“There are several potholes and dilapidated portions on the road. There was a time we made attempt to fix it temporarily for use by filling those holes with stones but it never worked. We (motorcyclists) have suffered so much. Sometimes we would ply another road which implies a longer distance than to ply the neglected road. I just want to appeal to the state government to assist us in fixing the road, a rather sad commercial motorcyclist said.

Mrs Rahman Mojisola, a resident of the locality told WITHIN NIGERIA that there are many abandoned roads in Osogbo, the capital of the state but this appears to be the worst. When rainy season starts, all these holes will be filled water and one would thought there are ponds here, she added.

‘I have lost hope and I do not believe this road can be fixed. Despite all efforts to fix it, none worked out. The state government should pity us, consider our plights and fix the road for passerbys, residents and users, Mojisola appealed.

Attempts by WITHIN NIGERIA reporter to speak with the lawmaker representing Osogbo state constituency, Hon. Taofeek Badamosi and his counterpart in Olorunda, Hon. Kunle Akande who were not only lawmakers but members of same party, the All Progressive Congress (APC) with the governor were not successful. Their lines were not available as at the time of filling this report.

Speaking on the development, the Osun State Commissioner for Works and Transport, Remi Omowaiye said he knows the said terrible road and it will be worked upon when the state government has the resources.

‘The road is coming from Oshogbo-Ilesa road to Oke-Ayepe through the John Mackay Primary School to Oke-Baale and a portion of the road has been worked on. The road is truly not in a good condition but we can not start the repair from the damaged portion alone, so we need to work on it all. It is one of the roads we will work on and we will start from the junction not from the school as you have posited. As soon as we have the resources, we will fix the road, Omowaiye added.

When asked if the road is included in 2021’s budget presented by the Executive Governor of the state, Adegboyega Oyetola since the ministry of work is aware of the terrible state of the road, the state commissioner for works said there are many bad roads due for repair in the state, they have been identified and there is no way he would know the total number of roads due for fixing as presented in the 2021 budget.

The commissioner for works and transport, Remi Omowaiye asked WITHIN NIGERIA reporter to get a copy of the 2021 budget to know if the dilapidated road already identified by the ministry was included in the budget. Findings revealed that the 2021 budget has not been made available to public. Attempts to get a copy via the state house of Assembly were not successful. 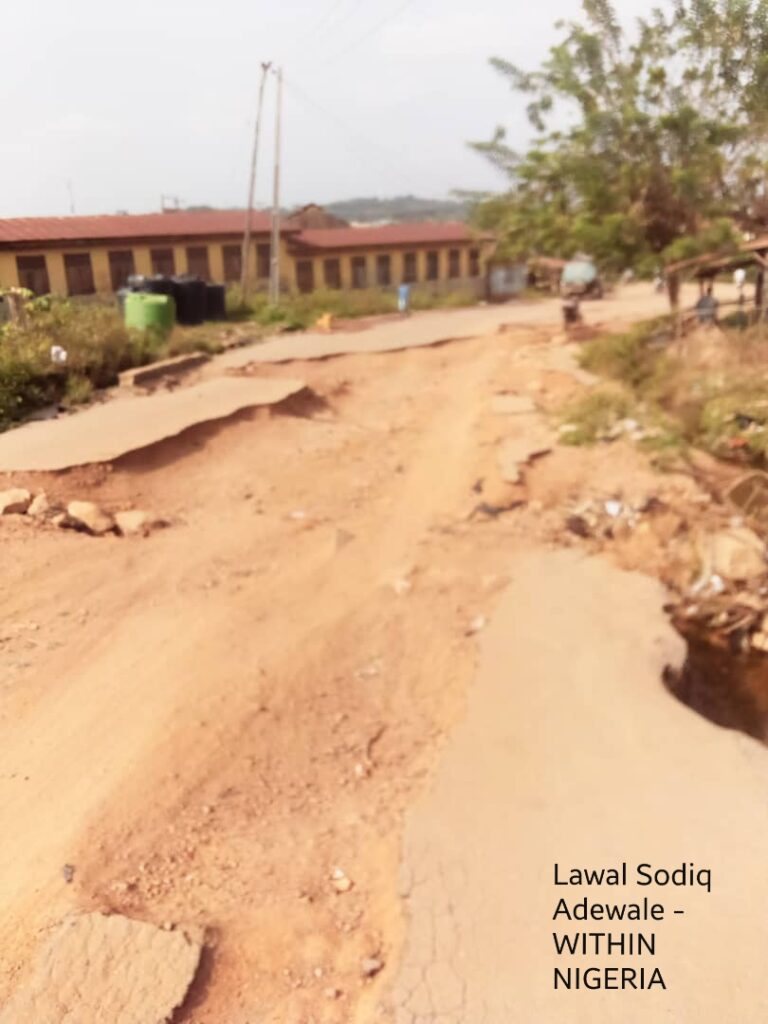 The works Commissioner, Omowaiye continued: a lot of factors will determine if we will fix the road this year. We have a pandemic and possible lockdown to face and we are still battling with COVID-19. I already told you that the road will be fixed. We already have a list of damaged roads the government will fix based on people’s request. It is one of the roads that is in critical need of intervention based on citizen’s need report. 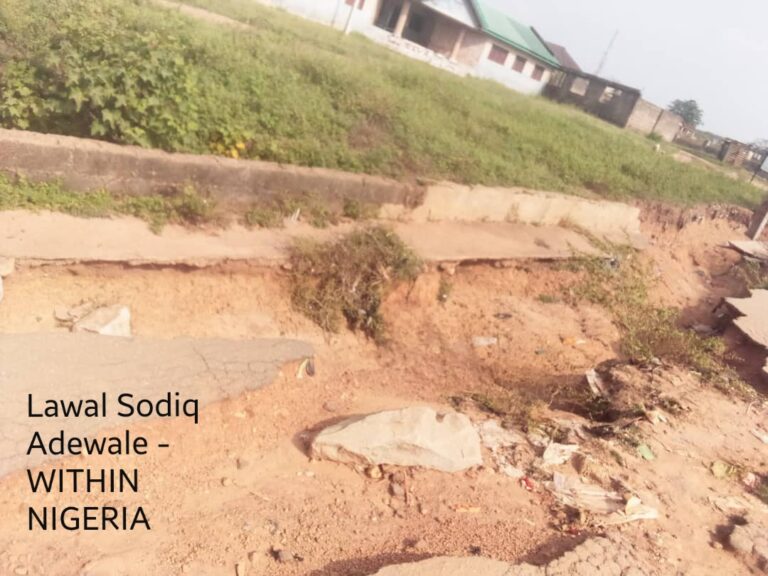 “Remember when we came into government, we promise to run a government based on the need of the people. The governor did a thank you tour to thank the people and in return, there were requests from communities. There was also a citizens needs assessment via DMIB (Digital Media Information Base). 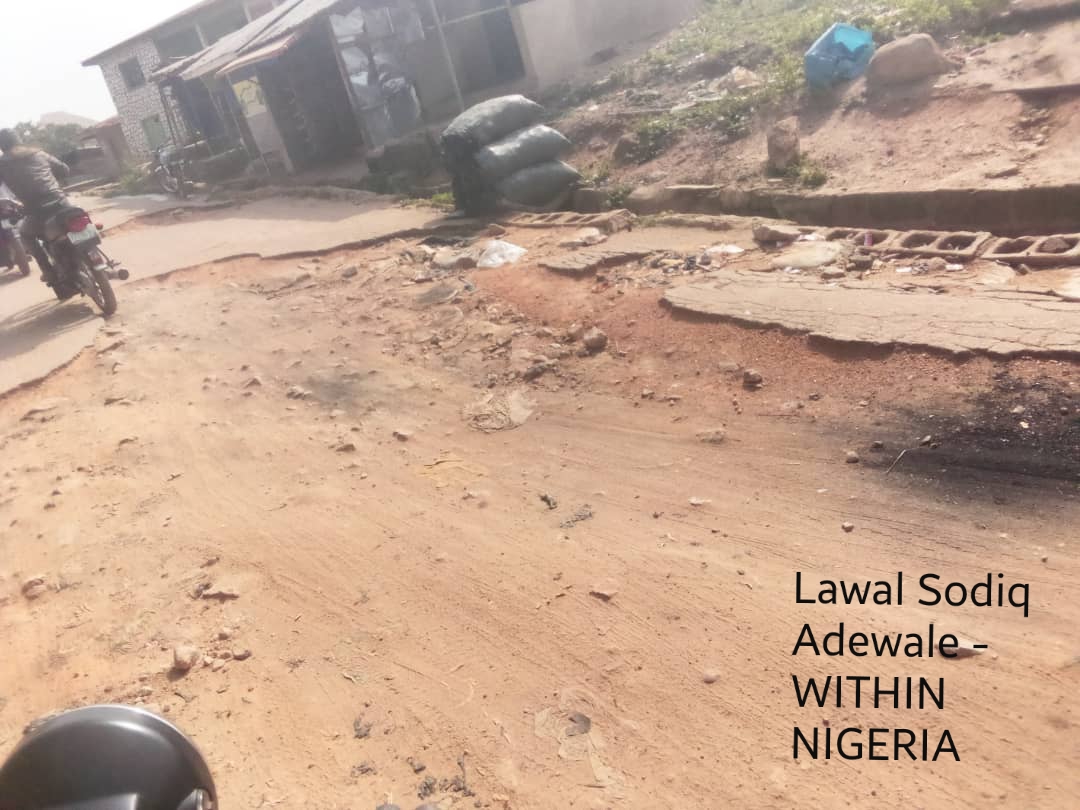