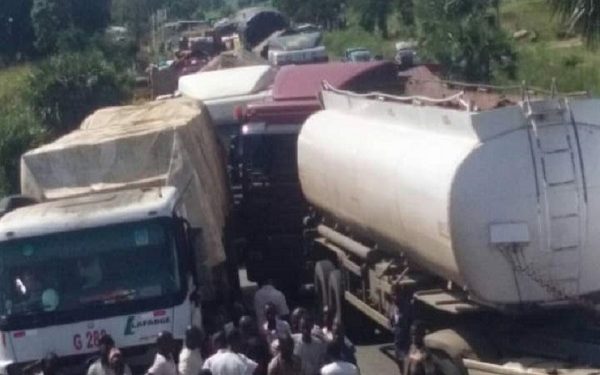 Following the alleged beating of a yet-to-be identified driver by police operatives, some tanker drivers on Sunday have reportedly shut down the Yola-Jalingo highway.

WITHIN NIGERIA learnt that the drivers used their tankers to block a section of the federal highway in a community near Mayo-Belwa, a town in the southern part of Adamawa state.

According to eyewitnesses, the development halted traffic movement along the highway, resulting into a frustrating weekend to unsuspecting travelers.

A witnesses said the tanker drivers were incensed after one of their colleagues conveying fuel was stopped by policemen and asked to pay for passage.

According to the witness: “When the driver did not heed the demand, the policemen descended on him, beat him to a stupor and even tore his clothes.”

He said the people around the area had to swoop on the policemen, rescued the man and took him to hospital.

An official of the Tanker Drivers Association, Sale Baba said the tanker drivers were prompted into action by old bitter encounters with the police.

“We are tired of the attrocities being perpetuated by the police. That was why this time they shut down the highway to demand justice for one of them who was brutalised for committing no crime,” Baba said.

Responding, the Police Public Relations Officer (PPRO) in Adamawa State, DSP Sulaiman Nguroje, said the police had swung into action over it.

He said: “We’ve heard about the commotion and the command has since deployed a team to investigate it. The alleged police officers have been arrested and you can be sure that the right action will be taken.”