Italy has begun easing key restrictions after a two-month coronavirus shutdown. 4.4 million Italians are able to return to work and some limits on movement have been removed in the first European country to impose a lockdown during the pandemic. (May 4)

ROME – Italy and the United States are a study in contrasts when it comes to the way they confronted the pandemic.

Italy was the first country hit hard after the virus spread beyond China’s borders and after some early missteps, the country took decisive action. Italy’s national lockdown was the first in Europe during peacetime and it was stricter and lasted longer than in other countries. Rules were closely enforced by police with the power to levy fines.

Leaders followed the same mask and social distancing guidelines as everyone else, as Italian factories started manufacturing ventilators, masks, and other protective equipment. Whenever a cluster of cases emerged, the area was quickly quarantined and the sick cared for by a free public health system.

“In Italy, we might have a reputation as being a nation of disorganized rule-breakers, but the truth is people tend to follow the advice of their doctors,” said Giovanni Sebastiani, a researcher and member of Italy’s National Research Council. “Our lockdown was long, we only reopened in measured stages, and almost everyone did what they were supposed to do.”

Biden vs. Trump: How do they differ on the international stage?

Italy, a country of 60 million, was the first in the world to have 200,000 official coronavirus cases (on April 28) and the first to record 30,000 deaths (May 7). But by late May the daily infection rate dropped from more than 5,000 to the low triple digits – and for the most part, it stayed there until last month.

Life under coronavirus lockdown in Italy: My quarantine, a worried wait for a test result – and relief

Now, as is the case in most countries in Europe, COVID-19 infections in Italy are rising again and the country topped 10,000 new infections on Friday, breaking its all-time daily high for positive tests. The World Health Organization has warned that the virus is rapidly spinning out of control in Europe and the region has reached a tipping point to contain a coronavirus second wave.

Still, earlier this month, German Chancellor Angela Merkel – Germany is the major European country with the most success in limiting the spread of the virus – warned her compatriots against taking vacations in high-risk parts of Europe. But she said there was no problem for them to travel to Italy, where she said the government “has acted with great prudence.”

Meanwhile, Italians shook their heads at news reports from the U.S. The politicization of mask-wearing, the uneven application and enforcement of coronavirus rules from state to state, disregard for health guidelines at beaches, parks, and political rallies and the way President Donald Trump handled his own case of COVID-19 by downplaying the severity of the disease were all difficult for many Italians to comprehend.

More: A town hall with Trump was testy, a forum with Biden was much quieter: Here are takeaways from each

“Italians have always looked up to the United States but what is happening now makes us watch in disbelief,” said Flavio Chiapponi, a political scientist with the University of Pavia in northern Italy. “In the earliest days of the pandemic, we learned our lessons by trial and error, which is why it hit us so hard.

“We hoped other countries would learn from what we went through but that didn’t happen in many countries, including the United States,” Chiapponi said.

Prime Minister Giuseppe Conte has vowed the country would not face another national lockdown.

This is what China did to beat coronavirus: Experts say America couldn’t handle it

“We are much more prepared now than we were in March and April,” said Giorgio Palu, a professor emeritus in microbiology at the University of Padova and a past president of the European Virology Society. “Hospitals are prepared and testing is far more widespread. We understand what we are dealing with.”

Many in Italy believe inadequate testing in the early weeks resulted in a massive under-counting of cases, meaning rates in March and April would dwarf current rates.

This week, the government introduced new restrictions for at-home social events, restaurants, school activities, and even weddings. Earlier in the month, a decree passed requiring mask use even outside and when far from others. The coronavirus state of emergency first put into place on Jan. 31 has now been extended until its one-year anniversary, giving authorities power to quickly lock down neighborhoods or towns when warranted. 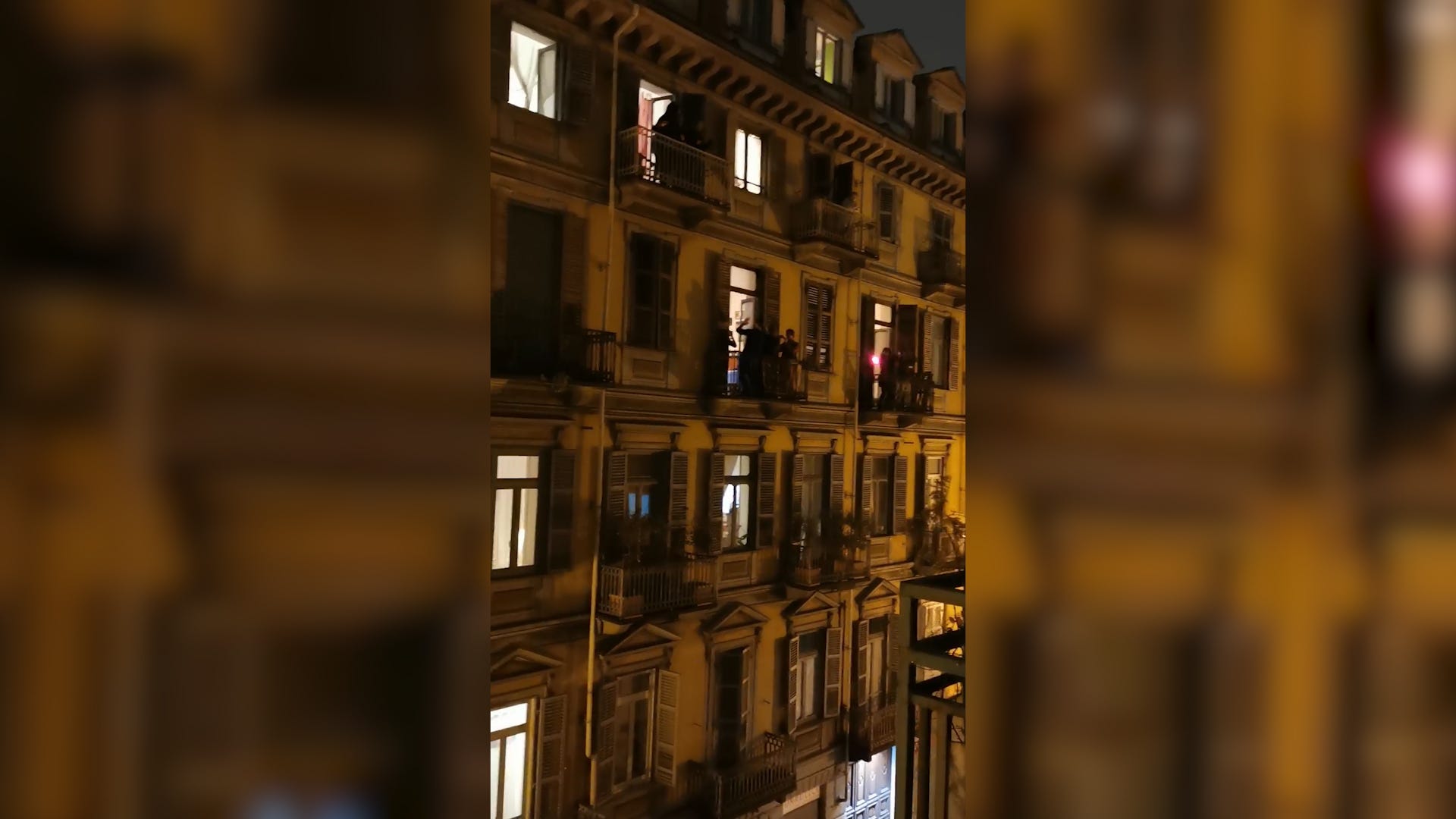 Homebound Italians do the Macarena together…sort of

People living in Turin, Italy were seen dancing and singing along to Los Del Rio’s “Macarena” to make the most of life at home.

The vast majority of Italians are OK with mask-wearing, according to a survey released during the summer by Imperial College London. That research showed that around 85% of Italians said they were “very” or “quite” willing to don a mask if advised to do so, the highest rate among the European countries surveyed.

As the infection rate climbed starting in September coffee bars and city squares were abuzz with the news. But cautiously optimistic residents said they didn’t lose their faith in the government. 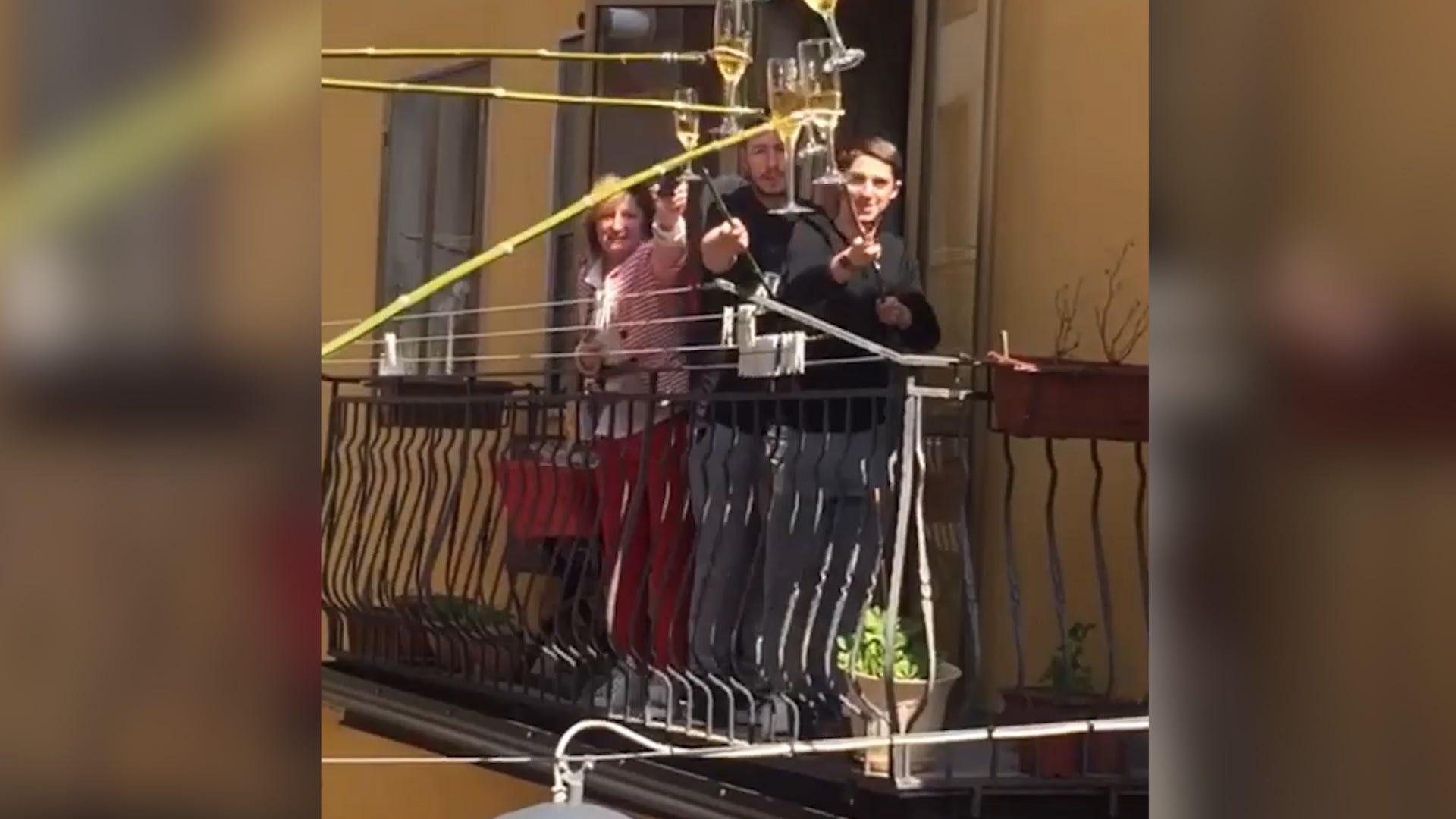 Good news: Isolating Italians find way to toast one another

Neighbors in Bella, Italy are getting creative to enjoy a toast with another during social distancing.

“I feel like the country’s leadership has sent a clear, united, consistent message about the coronavirus, unlike the situation back home,” said Molly Gage, a mother of two who originally hails from Pittsburgh but based in Rome for 13 years. “In Italy, the pandemic is treated like a public health issue, which is what it is. It’s difficult for everyone, but one thing that makes it a little easier is knowing that everything that can be done here is being done.”

Alessandra Bernero, an office worker who was sick with COVID-19 for four weeks in March and April, had a similar view.

“When I wake up the first thing I do is look on my phone for the latest information about infections and deaths and hospitalizations,” she said. “I was more relaxed a couple of months ago than I am now, but I know we are paying attention and taking the problem seriously. We have to keep it up until the virus goes away or there’s a vaccine.” 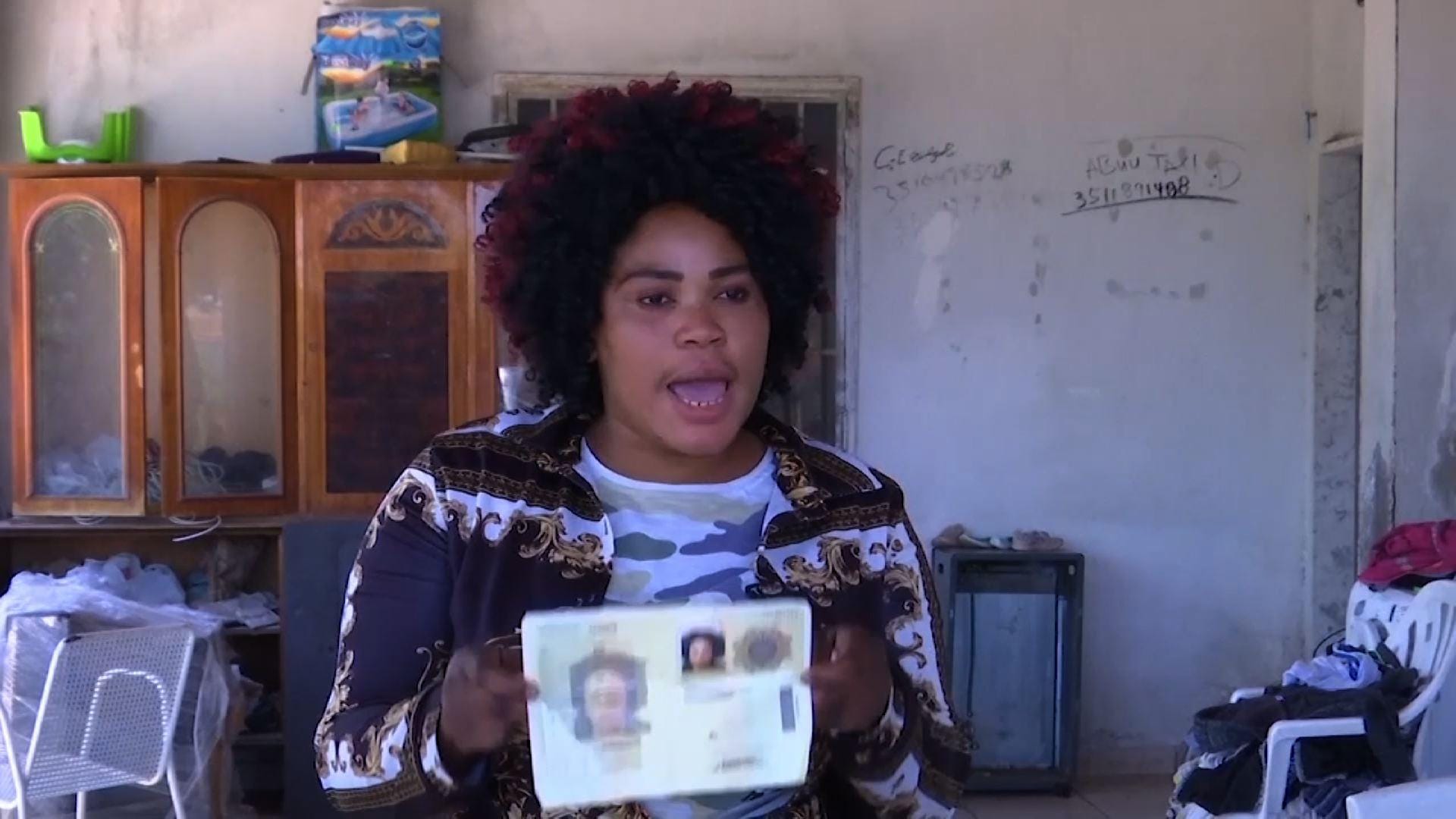 They are known as “the invisibles,” Italy’s undocumented African migrants who, even before the coronavirus outbreak plunged Italy into crisis, barely scraped by as day laborers, prostitutes, free-lance hairdressers and seasonal farm hands. (May 1) 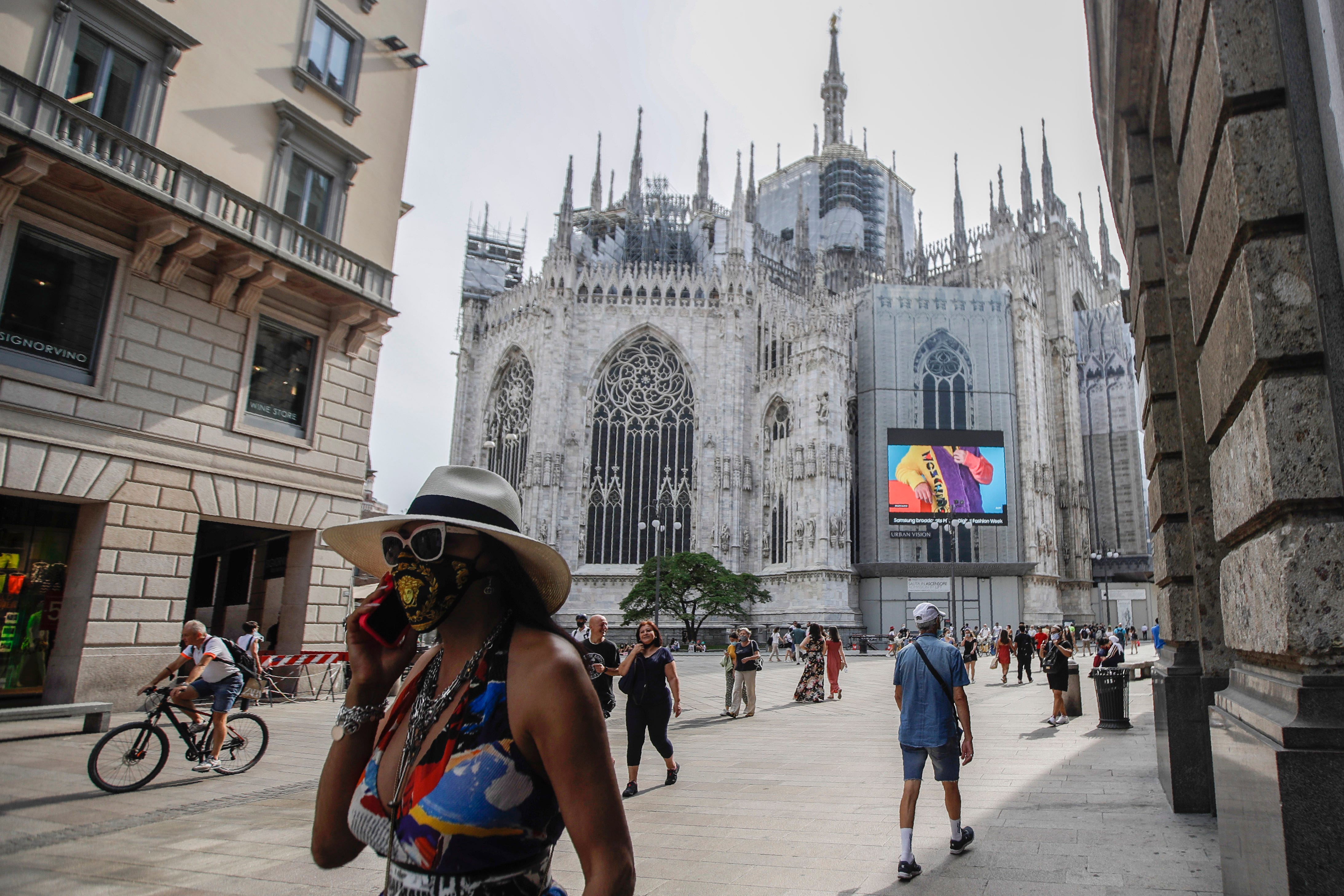