Vanessa Guillen: Timeline of the investigation

The U.S. Army Criminal Investigation Division was notified that Vanessa Guillen was missing on April 23.

The U.S. Army on Friday confirmed for the first time that slain Spc. Vanessa Guillen was sexually harassed and further retaliated against at Fort Hood, which her family in Houston has consistently alleged in their fight for criminal justice reform in the military.

Guillen’s superior would then go on to target her, calling her out in front of her peers and consistently making an example out of her, the report said.

“During a field training exercise, this same supervisor encountered Spc. Guillen while she performed personal hygiene in the wood line and Spc. Guillen reported that this made her uncomfortable,” the report said, adding that Guillen was adamant about not wanting to get in trouble by telling what happened.

Guillen first reported the incident to another supervisor and fellow solider, before confiding in two more of her peers after that supervisor noticed she was acting differently and asked if she was OK, according to the report. However, the investigation summary says Guillen did not want to make a formal complaint.

“The report indicates that Guillen informally reported that she was sexually harassed on two occasions, and in both instances her supervisor failed to report the harassment, and other leaders failed to take appropriate action,” the report said.

From Sept. 16, 2019, until Oct. 9, 2019, two soldiers did report the incident to Guillen’s unit leadership, who failed to initiate an investigation, the report said.

Guillen, who told Fort Hood soldiers that the supervisor during the second incident knew she was there but did nothing to avoid her and even shined his flashlight toward her body as she washed up in the woods, said to the supervisor, “of course I’m not in trouble — maybe you are.”

Maj. Gen. Gene LeBoeuf, chief of staff for the U.S. Army Forces Command, said on Friday that privacy concerns kept him from releasing the name of the superior accused of sexually harassing Guillen. However, he did say the person was one among 14 Fort Hood leaders who were either fired or suspended for their actions related to Guillen’s disappearance and death.

LeBoeuf on Friday said 21 people in the U.S. Army at Fort Hood have received punitive actions for their involvement in Guillen’s case.

Attorney Natalie Khawam, who represents the Guillen family, released a statement on the findings of the investigation Friday, saying soldiers would continue to go unprotected from sexual assault and sexual harassment in the military until laws were passed to further protect them from abuse.

It’s been a year since the death of Fort Hood solider Spc. Vanessa Guillen sparked national outcry. Her family members continue to fight for justice.

“We, the Guillen family and I, have found many inconsistencies in this report,” Khawam said. “Vanessa’s case was severely mishandled. We are upset that there’s a lot of redactions and aren’t being provided the names, especially the soldiers that were sexually harassing her. It’s heartbreaking and frustrating for all of us. So many errors from commanders down.”

Authorities suspect a fellow Fort Hood soldier, Spc. Aaron Robinson, beat Guillen to death with a hammer in an armory room on post the morning of April 22, 2020. Robinson fatally shot himself July 1 as authorities tried to question him, according to Killeen police.

Before Guillen’s remains were discovered at the end of June, her family led protests outside Fort Hood demanding more answers about the search for their then-missing sister. Guillen’s mother, Gloria, revealed that her daughter had confided in her that multiple soldiers were sexually harassing her on post. One of the soldiers Guillen said was harassing her was Robinson, according to the family.

Army officials at the time had maintained that no evidence substantiated any allegations of sexual harassment that were connected to Guillen’s death.

Nevertheless, the public rallied behind Gloria and the Guillen family, triggering a viral social media hashtag, #IAmVanessaGuillen, that hundreds of service members used to share their own experiences with sexual misconduct in the military.

Many of their stories were similar, often saying the military did little or nothing to investigate the incidents or prosecute the offenders. In many of the social media posts, soldiers said they never reported their experiences out of fear of retaliation.

More: ‘The military hasn’t had their #MeToo movement yet, until now’

The #IAmVanessaGuillen movement would eventually morph into the I Am Vanessa Guillen Act, a bill that if signed into law would allow investigators outside a soldier’s direct chain of command investigate instances of sexual abuse in the military.

Lawmakers in support of the I Am Vanessa Guillen Act say current Army protocols are flawed and problematic because the investigators are often those in a victim’s direct chain of command and frequently have personal relationships with those accused of a crime and the victim who is reporting it. As a result, victims fear retaliation if those investigators fail to properly investigated without bias. 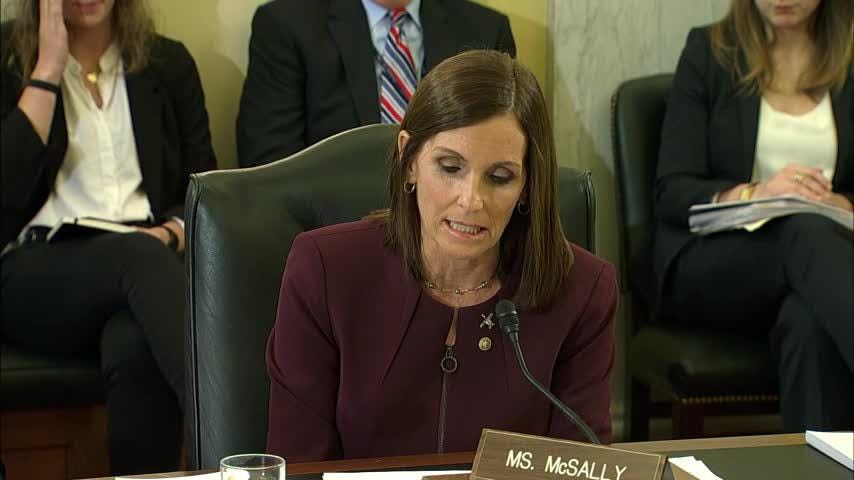 Sen. McSally says she was raped while in Air Force

Sen. Martha McSally, the first female fighter pilot to fly in combat, said Wednesday that she was raped in the Air Force by a superior officer. She made the disclosure at a Senate hearing on military sexual assault. (March 6)

LeBoeuf on Friday said Murray’s investigation found no evidence that Robinson had sexually harassed Guillen, although evidence showed he did sexually harass another soldier. However, the report did unveil new details about how Robinson managed to escape post, gain access to a gun and fatally shoot himself in the head just hours after Guillen’s remains were found on June 30.

The investigation report released Friday confirmed it was poor communication by Fort Hood leaders that contributed to Robinson running away from a conference room where he was already being held for breaking pandemic protocols.

Agents with the U.S. Army Criminal Investigation Command requested Robinson be held in the conference room by an unarmed guard so they can question him regarding Guillen’s death. However, Fort Hood leaders failed to include the guard in a text exchange.

Fort Hood leaders failed to let the soldier who was watching him know that Robinson was suspected of killing Guillen, and that him being held on post was not just for breaking pandemic rules. During that time, Robinson who had his cell phone called his mom to say, “Don’t believe what you hear about me.”

Robinson as he was being watched ran out of the conference room and left Fort Hood. However, the details about how he got past gate security and gained access to a gun is still being withheld pending the results of a criminal investigation.

Murray’s investigation did not include criminal misconduct connected to the disappearance and death of Guillen. The FBI, the U.S. Army Criminal Investigation Command and other law enforcement agencies under the supervision of the U.S. attorney’s office are still actively investigating those matters, according to the report.

The investigation was also separate from the Fort Hood Independent Review Committee, a group of former military and law enforcement agents who found, according to a report released in December, that Fort Hood leaders created a permissive environment that led to its culture of crimes, namely those involving sexual assault and sexual harassment.

Murray’s investigation released Friday was to specifically look into how unit leaders at various levels responded to the disappearance and death of Guillen. It was also to investigate the allegations of sexual harassment against Guillen, the allegations of sexual harassment committed by Robinson, the 3rd Cavalry Regiment (Regiment)’s SHARP program and more.

Murray’s investigation Friday included ten key findings. One of those findings, in addition to confirming that Guillen was sexually by a supervisor and that Robinson had sexually harassed another soldier but not Guillen, were that the acting senior commander of Fort Hood at the time failed to effectively engage the media and the public following Guillen’s disappearance.

“This reluctance was driven by a firm belief that the command should prioritize the protection of the integrity of the investigation over any command engagement with the media,” the report said. “By taking this cautious stance, the acting senior commander initially misjudged the significance of the disappearance of Guillen as a high profile event and failed to react appropriately to the incident over time. This failure contributed to an inability to inform and educate the public in a timely manner, as well as a failure to maintain transparency with the Guillen family.”

Murray said while the search for Guillen was immediate and well coordinated, the 20-year-old’s disappearance, which highlighted gaps and ambiguities in U.S. Army policies regarding the characterization of Soldiers who are missing.

Murray’s investigation did not include criminal misconduct connected to the disappearance and death of Guillen. The FBI, the U.S. Army Criminal Investigation Command and other law enforcement agencies under the supervision of the U.S. attorney’s office are still actively investigating those matters, according to the report.

The investigation was also separate from the Fort Hood Independent Review Committee, a group of former military and law enforcement agents who found, according to a report released in December, that Fort Hood leaders created a permissive environment that led to its culture of crimes, namely those involving sexual assault and sexual harassment.