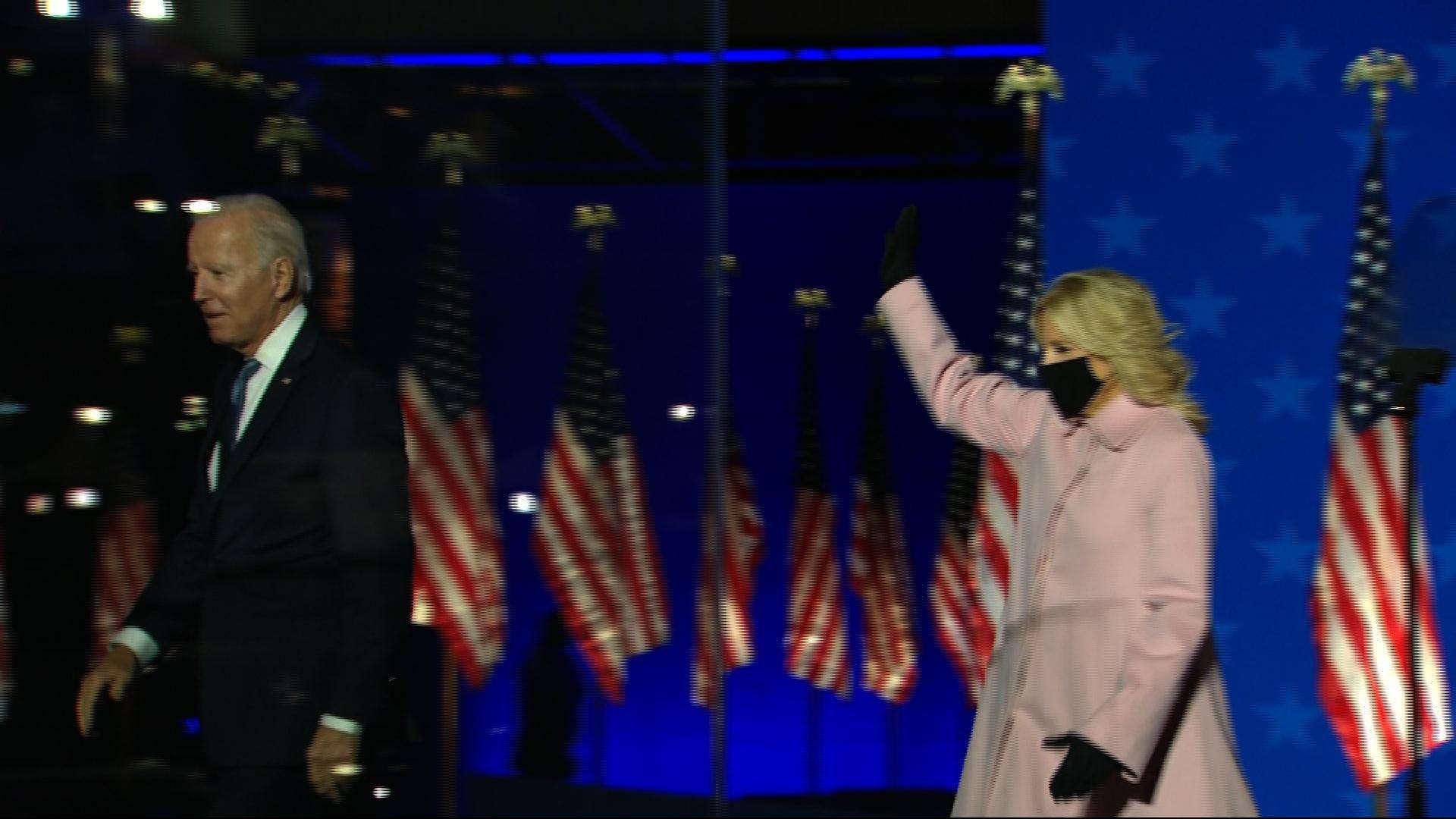 International messages of congratulation started rolling in Saturday for U.S. President-elect Joe Biden after he was projected the winner of the presidential election over President Donald Trump. International allies contemplated a new White House that has raised the prospect of resuming a form of business as usual: a more fact-driven, multilateralist American presidency that wants to build bridges, not burn them.

Fiji’s prime minister offered his good wishes before the race was even formally called, saying in a tweet that the U.S. and the tiny South Pacific island nation must work together tackle climate change and rebuild a battered global economy.

“Now, more than ever, we need the USA at the helm of these multilateral efforts (and back in the #ParisAgreement – ASAP!),” Frank Bainimarama wrote.

In Germany, foreign minister Heiko Maas called for a “new transatlantic beginning, a new deal.” Rahul Gandhi, a senior leader of India’s main opposition Congress party, said he was confident Biden would “unite America and provide it with a strong sense of direction.” Canada’s leader Justin Trudeau said “our two countries are close friends and allies,” while in France’s capital where church bells rang to celebrate Biden’s victory, Paris mayor Anne Hidalgo spoke for many around the world when she tweeted with relief: “Welcome back, America.”

‘These are tears of joy’:Americans honk horns, dance in the streets as Joe Biden and Kamala Harris claim victory in a deeply divided nation

The world had watched with unease, transfixed as President Donald Trump claimed premature victory in the hours after election, made unsubstantiated claims of voter fraud and launched legal fights. Trump has yet to formally concede the race.

Still, as world leaders and diplomats reflected on what a Biden administration could mean for their engagement with the U.S., some global foreign policy voices cautioned the former vice president’s biggest asset may be that he’s not Trump.

“We expect a more practical approach to China from Biden, without all the constant China-bashing,” said Huiyao Wang, a senior adviser to China’s Vice Premier Liu He. Wang also directs the Center for China and Globalization, a Beijing tank think.

“If Biden is serious about improving the U.S. economy and finding a way out of its coronavirus mess then he needs to collaborate with China, not fight with it,” Wang said, noting that “large structural differences” between how Beijing and Washington viewed the world on issues from markets to governance should not preclude working relations.

Biden “will certainly change the style of US foreign policy but will hardly be able/willing to reverse some of the its key trends, including confrontations w/China, Russia, and Iran,” tweeted Dmitri Trenin, the director of the Carnegie Moscow Center, a foreign affairs think tank based in Russia’s capital.

For some, Trump’s defeat came with an assumption: Biden would set a foreign-policy course that eschews a fanboy approach to dictators, avoids zero-sum game trade wars and restores dignity to America’s battered global image that poll after poll has shown dropped precipitously during Trump’s watch, and that has emboldened authoritarian leaders from Brazil to Saudi Arabia to look to Trump for favor and friendship.

These countries quietly slid into authoritarianism: Should the US be concerned under Trump?

“Biden will bring decency back to world politics,” predicted Abdulsalam Kamara, an economist and business professor at the University of Sierra Leone, in West Africa.

With the exception of authorizing the Pentagon to assist African militaries fighting extremists, Trump’s foreign policy mostly ignored Africa and Kamara said he believes a Biden administration will lead to increased foreign investment on a continent that has long struggled to shed an “aid syndrome” image and other negative stereotypes.

Biden is expected to reenter international agreements abandoned by Trump, such as the Iran nuclear accord. In fact, just hours after the U.S. officially withdrew from Paris Climate Agreement on Wednesday at Trump’s insistence, Biden vowed to rejoin the global pact to reduce emissions on “day one” of his presidency.

“The world sort of survived four years with a somewhat restrained Trump,” the former Swedish prime minister, Carl Bildt, said on Twitter on Nov. 4 when it first became clear that Biden was on track to overtake Trump’s lead in key battleground states.

“A world with a triumphant Trump could well (have been) a different thing,” Bildt added, echoing concern across Europe that another Trump term would have put considerable strain on the NATO military alliance and other priorities of the transatlantic partnership.

Still, in the absence of an immediate winner on Election Day between Trump and Biden there was some gloating and false claims from Russia and other parts of the world that have long been on the receiving end of U.S. criticism about troubled democracies.

“Americans invented a fast version of everything, like you can open a can and a hot pizza pops out, but THEY STILL HAVE TO COUNT VOTES LIKE IT’S 1854,” the London-based, Lebanese satirist Karl Sharro said in a social media post.

“People are tired of anarchy throughout the country. America is experiencing the same turmoil – pogroms, looting and violence – that we in Russia lived through 400 years ago,” said Vladimir Zhirinovsky, the leader of the nationalist opposition Liberal Democratic Party of Russia, in comments to VGTRK, a state-owned broadcaster that along with TV channel Rossiya 24, also funded by the Russian government, aired lengthy no-comment videos of people shouting and fighting in the street.

However, there were also fears the vote leaves the U.S. a bitterly – and dangerously, evenly – divided country where the appeal of Trump’s populist, insular and xenophobic remarks and policy have caused lasting damage not easily reversed.

“OK, America, so what the hell happens now?” read a headline in Britain’s The Guardian newspaper amid Trump’s lingering, unsubstantiated allegations of voter fraud.

These fears were not only for America’s domestic situation but extended to places like Brazil, where President Jair Bolsonaro has modeled himself on Trump by disputing climate change, refusing to take coronavirus seriously, praising dictators and offering government jobs to friends and family.

“It’s good Biden won,” said Adriana Matias, 50, a secretary at a cardiology clinic in the affluent neighborhood of Leblon, in Rio de Janeiro. “But I’m still worried about what’s happening here in Brazil given that Bolsonaro does whatever Trump has done. This unhinged communication through social networks, the arrogance. They’re both the same in this. Both ignore science and think they know more than everyone else,” she said.

Yet not everyone was happy to see the back of Trump or feels that Biden has all the answers for a world grappling with a raging pandemic, rising mass unemployment, volatile stock markets, social unrest and simmering conflicts, some of them familiar like in Afghanistan and Iraq, and others not so much – such as fighting that erupted this summer between Armenia and Azerbaijan, ongoing political unrest in Belarus, and, after years of relative calm, the growing threat of a new civil war in Ethiopia.

Marine Le Pen, the leader of France’s far-right National Rally political party told French TV she believes another Trump would have been better for France “because Donald Trump is the return of the nation. He’s the end of this wild globalization, this deregulation, this disappearance of borders that I think has really hurt” us.

Nigel Farage, the former leader of Britain’s far-right Brexit party that helped engineer the country’s divorce from the Europe Union, criticized mail-in voting and urged Trump to “produce lots of evidence” and keep fighting his allegations of fraud in the courts.

Others, like Japan’s new Prime Minister Yoshihide Suga, were adamant that it was “the Japan-U.S. alliance that is the foundation of Japanese diplomacy,” not whether it was Trump or Biden who occupies the White House. “On that premise I will develop a solid relationship with the new president,” Japan’s leader told a parliamentary session.

“A Joe Biden administration carries unknown risks (for Japan)” … “Will Japan be able to recreate the close personal ties between Trump and former Japanese Prime Minister Shinzo Abe (a favorite golf partner for the president)? Most importantly, will the U.S. go soft on China?” wrote William Sposato in Foreign Policy magazine.

Ukrainian President Volodymyr Zelenskiy tweeted Saturday that “Ukraine is optimistic about the future of the strategic partnership with the United States.”

Zelenskiy added that the two countries “have always collaborated on security, trade, investment, democracy, fight against corruption. Our friendship becomes only stronger!”

But with Ukraine at the center of allegations that resulted in Trump’s impeachment last year, and that relate in part to time Biden’s son Hunter spent working for a Ukrainian gas company, the Biden-Zelenskiy relationship could face a period of awkwardness.

Leaders across Latin America congratulated Biden, but Mexican President Andrés Manuel López Obrador stayed silent all afternoon. He then said that he would not congratulate any candidate until all legal actions are concluded.

“Mexico always looks inward,” said Esteban Illades, editor of the Mexican magazine Nexos. “(President Andrés Manuel López Obrador) has only ever left the country once during his administration. So whatever happens outside our borders is of no particular interest.” Illades added: “Mexicans see no difference between Trump and Biden.”

And Ali al-Ahmed, a Washington, D.C.-based Saudi Arabia scholar, said that while the view in Riyadh and neighboring Gulf State capitals is that Trump has been a steadfast ally for the region’s leaders because of his Iran policy, his enthusiasm for large arms deals and his brokerage of business links and a “normalization” policy with Israel, for many regular Saudis there is a feeling of “anybody but Trump.”

Al-Ahmed said many Saudis feel ashamed at how Crown Prince Mohammed bin Salman, Saudi Arabia’s de facto ruler who enjoys a close relationship with the Trump administration, masterminded the killing of journalist Jamal Khashoggi. Khashoggi was murdered inside the Saudi Consulate in Istanbul in 2018 and U.S. intelligence agencies as well as the United Nations concluded the crown prince ordered the execution or at least bears responsibility for the Saudi operatives who carried out the assassination.

“There’s a widespread feeling that Trump has not been good for the Saudi Arabia’s image in the world,” he said. “I am not saying they are for Biden, per se.”

And, as usual, Iran wasn’t happy.

“The situation in the US & what they themselves say about their elections is a spectacle!” Iran’s Supreme Leader Ayatollah Ali Khamenei tweeted Saturday. “This is an example of the ugly face of liberal democracy in the US. Regardless of the outcome, one thing is absolutely clear, the definite political, civil, & moral decline of the US regime.” 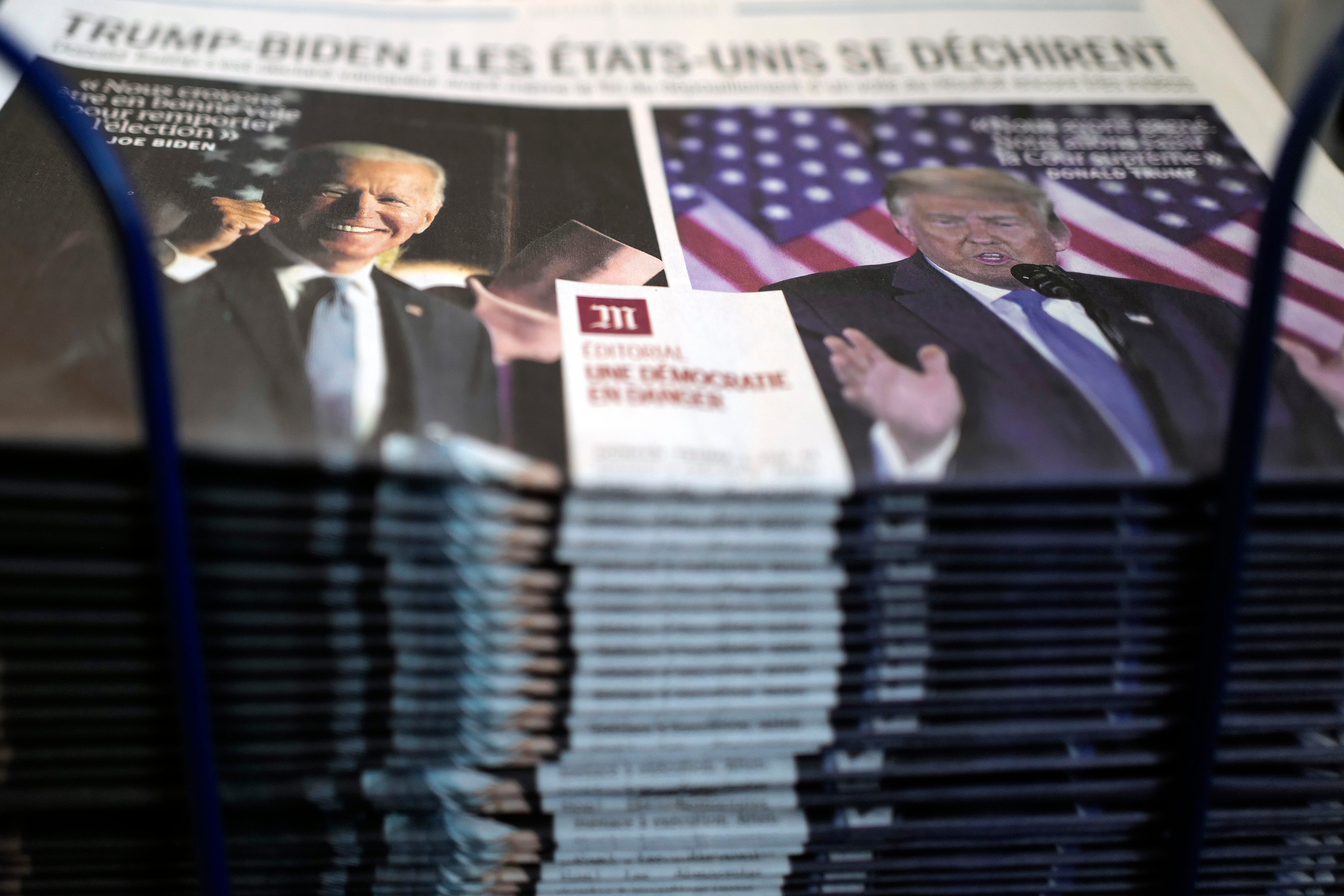